While the market hasn’t been able to adopt Vega GPUs from AMD completely, some of the newer reports are now suggesting the launch of its successor. As it was revealed by the company, the next generation GPU from AMD would be called Navi. It might be coming out as early as August 2018. Vega was indeed a game-changing GPU for AMD and Navi is expected to be even better. 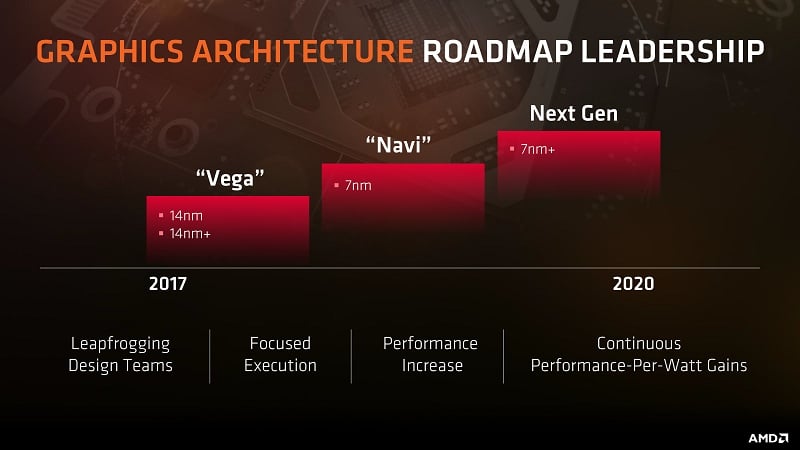 Tweak Town has got the piece of scoop from their sources that the launch could happen sometime around July or August next year. The report further adds that the Navi professional-grade card will be launched at SIGGRAPH 2018. On the other hand, AMD is yet to launch its products that were announced during SIGGRAPH 2017.

You can say that 2017 was probably the best year for AMD as it saw success in almost all the components it launched. From Ryzen processors to Threadripper and then to Vega cards along with the usual 500-series cards launched this year. The Vega cards have been a step forward in the graphics card technology with HBM2 and have proven their prowess even against the best card from Nvidia currently.

As per the information provided by AMD, the Navi series graphics card will be based on 7nm process. This is a giant leap forward considering the 14nm process used for the current gen Vega cards. AMD’s roadmap also includes a later generation GPU architecture, that hasn’t been named yet, and it will come with 7nm+ architecture. It should be out by 2020.

The only competition that AMD has is Nvidia that has a huge lineup of cards and several more are about to launch soon. The Nvidia GeForce GTX 1070 Ti is one of them, which might be capable of giving its Vega counterpart a run for its money. AMD might have to look into it before going forward with the plans of launching Navi based graphics cards in the market.