Motorola Moto Z Play shows up on GFXBench with an impressive all round configuration, although we would have been more pleased to see a more powerful chipset such a Snapdragon 652 or a Snapdragon 650 at the very least. However, details according to the specs sheet state that the smartphone will feature a Snapdragon 625, which is one of lesser performing chips released by the company.

However, it still packs a decent processor configuration, as you get an octa-core Cortex-A53 running at 2.0GHz. Though Cortex-A53 is not the most powerful processor released by ARM and have been intended to tackle lesser tasks in a smartphone, combine 8 of them and see performance significantly increased. Since Moto Z Play will feature a lesser performing chipset in comparison to Snapdragon 650 and Snapdragon 652, we also expect its price tag will be slightly lower than the competition. 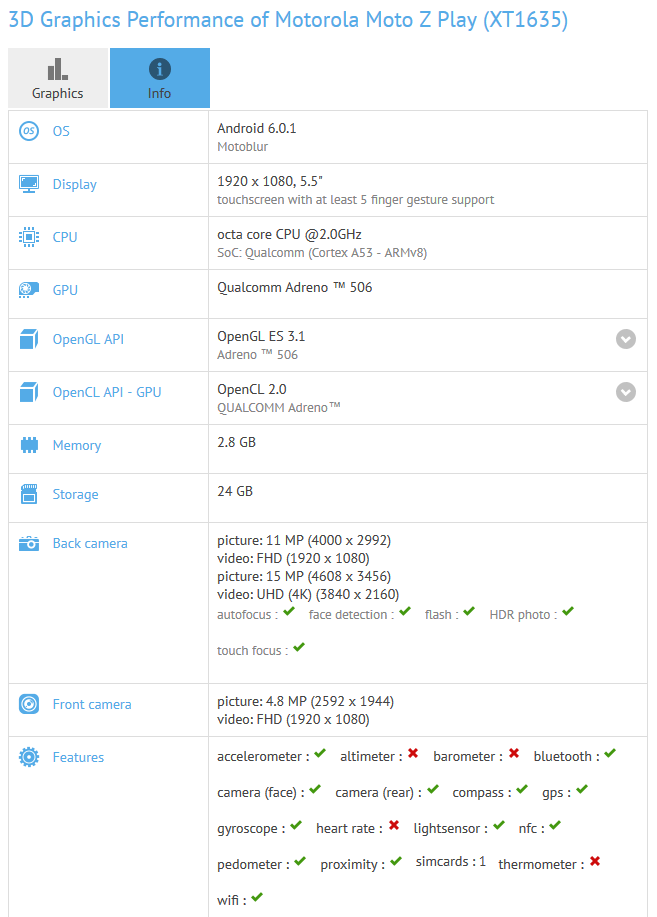 The screen size is a 5.5-inch one, with a 1080p display but the benchmarking sheet does not show if the smartphone will feature an OLED panel or not. An OLED panel will have several benefits over different displays, so we’re counting on Motorola to make this happen. There’s also 3GB of RAM, and 32GB of internal storage. Here’s the most interesting thing about the smartphone. There are two camera details stated at the ‘Back camera’ category, indicating that the Moto Z Play edition could come with a dual camera.

The main shooter of those cameras could provide support for recording 4K videos and has a maximum resolution of 16MP. The lesser one has a 12MP resolution, while the front camera is a 5MP sensor. According to different sources, Moto Z Play could also feature a 3,500mAh battery, but all of these upgrades could lead to a higher price tag. Since we are not clear on the pricing details, we shall make everything available to you once the information becomes crystal clear to us.