We previously reported, Motorola recently sent out invitations for an event to be held on July 28th. During this event, the third-generation Motorola Moto G and two variants of the Motorola Moto X are expected to be introduced by the company. While official unveiling of the handset is yet to be confirmed, Motorola Moto G (2015) gets listed on Spanish online retailer fnac, available in both white and black. 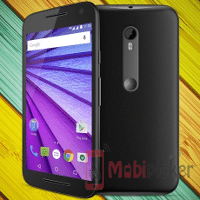 All we know about the third-generation Motorola Moto G also known as Moto G (2015) is that it will feature the Snapdragon 410 SoC, and contains a 64 Bit quad-core 1.7GHz CPU and the Adreno 306 GPU, 2GB of RAM is inside along with 16GB of internal storage. A rear 13MP camera and a 5MP front snapper along with a 5-inch screen 720 x 1280 resolution display. All of this powered by a 2470mAh battery, and comes pre-installed with Android 5.1.1 out of the box. The phone supports 4G connectivity, and it is priced at the equivalent of $215 USD on the Spanish online retailer’s site.

After July 28th all of the rumors and leaks won’t matter once the third-generation Motorola Moto G is made official. Watch out for more details to come!