It’s raining Marshmallows! Well not literally; we are talking about the Android 6.0 Marshmallow update here. The new update was revealed a couple of months ago and has been reaching various flagships now. Motorola devices are among the first ones to get the update, and it is the same with the Motorola Moto G. The Moto G (3rd Gen) has started receiving Android 6.0 Marshmallow as announced on Twitter by Motorola India. 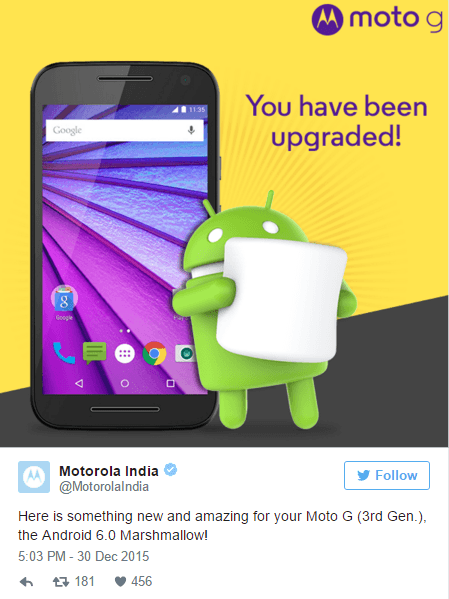 The new Marshmallow update comes in a 2GB package and gets a build number 24.11.25.en.US. In case you don’t know, the update was sent out to the Moto G (2015) in Canada and the US last week, and it has now come to India.

As you might be knowing, Android 6.0 comes with Google Now on Tap, Doze, new app permissions, December security patches, etc. The roll-out is gradual, which means that not all the devices will get the update immediately at the same time. It might take a day or two for your device to get the update notification.

You can also check for the update manually by going to Settings > About Phone > System Update. Enjoy this new year gift from Motorola!