MobiPicker
News Accessories Moto 360 smartwatch received a price cut of INR 5,000 in India
Share on Facebook
Tweet on Twitter
Deal Alert: 49% Off on ExpressVPN
Touted as #1 VPN in the world, ExpressVPN is now offering 49% off & an additional 3-months of service on its annual plans.

Motorola recently introduced the Moto 360 smartwatch with stainless steel bands in India, months after the leather bands variant. The Moto 360 with metal and leather bands were priced at INR 19,999 and INR 17,999 respectively. The company has now declared a temporary price cut of INR5,000 on both the models which makes it INR12,999 for leather, and the INR14,999 for metal version. The discounted price will be available till stocks last, exclusively at Flipkart. 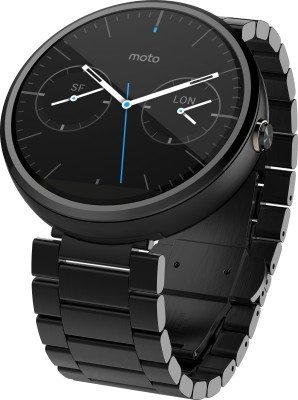 In terms of specifications, the Moto 360 comes with a 1.5inch display with a resolution of 320 x 290 pixels, Corning Gorilla Glass protection, TI OMAP 3 SoC, 512MB of RAM, 4GB native storage, and a 320 mAh battery. Other features include, IP67 rating for water resistance, optical heart rate monitor, and pedometer.

Motorola’s Moto G (2nd Gen) is also available on discounted price for a couple on days, exclusively on Flipkart.