While Intel’s 7th Gen Core i5 and Core i7 7th Gen processors are mainly targeted at mainstream performance, the new X-series – Core i5, Core i7, Core i9 and Core i9 Extreme are targeted at Extreme Performance. Here are the main features –

The Core i9 7980XE is Intel’s unbeatable flagship Skylake-X Processor, featuring 18 cores and 36 threads. It’s priced at $1999 and will most likely be an overkill for gaming. But the powerful top-notch processor will be ideal for content creators who wish to get the maximum throughput, especially when it comes to compute-intensive tasks like rendering. The new Turbo Boost Max 3.0 technology will boost the clock up to a whopping 4.5GHz! The chip comes with 18MB L2 cache and 24.75MB of L3 cache and features quad channel DDR4 up to 2666 MHz. 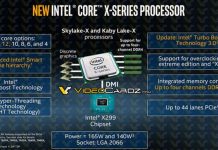