The new enchantments are our favorite feature that has been introduced. These new enchantments are called Frost Walker and Mending. A lot of you must be wondering how they work well fear not. We did a lot of experimenting and were able to figure out how to use them. You’ll have to search for these enchantments all over the map. Here is our Minecraft Console Edition Guide for using enchantments.

This one works with boots. Apply the to your footwear and you’ll be able to walk on water with it. When you put the enchanted boots on and get close to water, it turns into ice. Thus, allowing you to traverse. However, after 3 to 5 seconds this ice will vanish, leaving behind water once again. Keep in mind that you can’t remain static over newly formed ice while wearing these enchanted boots because the ice will thaw beneath your feet.

One more thing, you need to be on the same level as the water. So, if you’re one block above the water level, then no ice will form.

This works for 16 different items. These include helmets, chest plate, leggings and weapons such as swords, pickax etc. When you break blocks with an item enchanted with Mending, it’s durability is regained by picking up XP. So, you don’t need to find similar materials to repair it like before. This is very useful when applied on weapons. Any mobs you kill with an enchanted weapon will drop XP. Once you pick it up, the durability of your weapon will go back up again.

Minecraft Console Edition introduces new features such as a simpler crafting system, in-game tutorials, and split-screen multiplayer (excluding Vita), as well as online multiplayer for up to eight players online, which requires a PlayStation Plus subscription (PS4 only), Xbox LIVE (requires Xbox Live Gold subscription), or Nintendo Network. As with all versions, updates are free of charge.

Let us know what you think of our Minecraft Console Edition Guide. 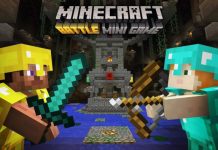