Minecraft developers Mojang have teamed with 4J Studios to make a free update for Minecraft: Console Edition that introduces what is essentially a deathmatch mode titled “Battle”. According to Mojang, this is the first of many mini-games that will be released for the game. Read on to find out how this new mode, Battle, works. 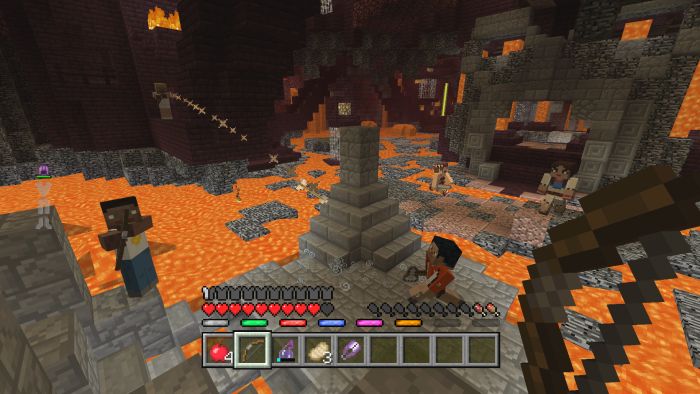 In Battle, players fight other players in a last-man-standing tournament. To survive, you must hurry to snag weapons and resources from chests while dealing with each arena’s many environmental hazards (such as lava, seen above). The mode is built specifically for consoles and couch-based play, and so features 4-player splitscreen as well as 8-player online multiplayer. The mode will come with its own in-game matchmaking system as well (hopefully it won’t be too terrible).

The mode is described by Mojang as requiring “tactical thinking” and being “fast paced”. There won’t be any crafting in this mode, and equipping armour will be instant and done in the touch of a button. Unlike most deathmatch modes, you will have only one life, as this is a last-man-standing variant of deathmatch. If you do die in this mode, you turn into a bat, free to harass your killer.

Battle will be available in a free update scheduled for June, and will come with 3 arenas. It appears to be exclusive to Minecraft: Console Edition so far, and additional arena map packs will be made available at $2.99 each. Let us know what you think about Battle in the comments below.