It was expected that HTC 10 will launch in different variants, but a different chipset isn’t what anyone expected. As of now, it seems that the Taiwanese manufacturer plans to release a mid-range variant too alongside the proper flagship, HTC 10.

HTC 10 will be powered by the Qualcomm Snapdragon 820 chipset, and if the news from Chinese blog MyDrivers is to be believed, one particular version of HTC 10 will come equipped with an octa-core Qualcomm Snapdragon 652 processor. Along with that, the mid-range variant will have 3GB RAM at its disposal as opposed to 4GB in the proper flagship. The internal storage will stand at 16GB with hopes of expandable storage. This pits the HTC 10 with Snapdragon 652 straight against the LG G5 model released in Latin America. The same blog also confirmed the pricing to be around $585 outright. 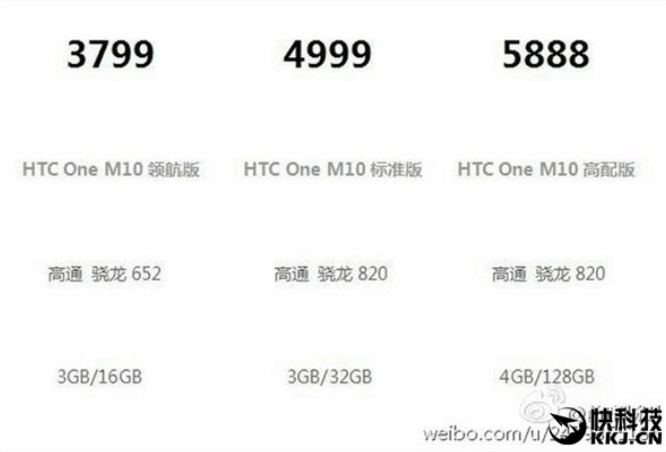 It is to be noted that these prices come from Chinese blog so the final pricing in different parts of the world might vary. HTC 10 is expected to be officially unveiled on April 12. Also, the handset should go on sale 3 days later, on April 15. Though, this information is yet to be confirmed by the company itself.

The smartphones will ship with Android Marshmallow 6.0.1 and will be powered by a 3,000 mAh battery.