Along with Windows 10 Mobile, Microsoft has also launched the new cumulative updates for both versions of Windows 10: version 1511 (November Update) and 10240 (the July 2015 RTM version) 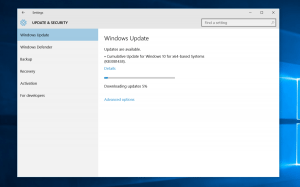 Microsoft is rolling out cumulative update, KB3140768 to the users of 1511 version. This update essentially improves quality and brings security fixes to PCs running this particular version. It’s important to note that “No new features are added in this update”.

Basically it pushes the the version to 10586.164, bringing both PC and Mobile in same line of updates. The same version build was seeded to Windows 10 Mobile earlier.

There are also improvements to Bluetooth, wearables, and apps accessing contacts, as well as better reliability in app installation and Narrator. The update also includes importation fixes, including fixing the bug that blocked users from logging to an Xbox from a PC running Windows 10.

There has been enhancements to OS shutdown, group policy applications, displays, and Windows Update. The printing issues in Internet Explorer have also been addressed in this update.