The Microsoft has unveiled two smartphones at the MWC 2015 – Microsoft Lumia 640, and the larger Lumia 640 XL. Both the smartphones run on Windows Phone 8.1, however, they will be updated to Windows 10 later on. 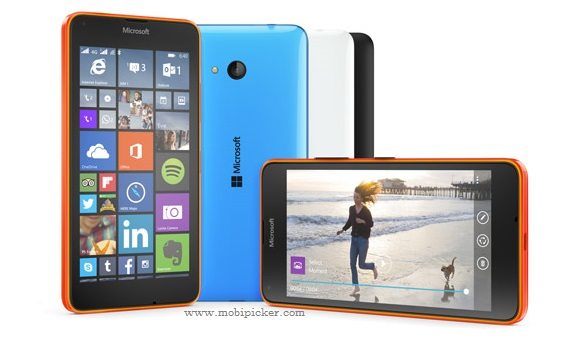 The Microsoft Lumia 640 offers a larger and  better display with Corning Gorilla Glass 3 protection than earlier 6-series smartphones. It sports a 5 inch IPS display with 720p resolution and is powered by a Snapdragon 400 chipset with 1.2GHz quad-core Cortex-A7 processor, paired with 1GB of RAM. screenbigger and has a better screen than other 6-series devices, it packs a 5″ IPS display with 720p resolution (294ppi). The device packs 8GB on-board memory, which can be increased up to 128GB via microSD card.

The camera department is also upgraded than earlier versions, the Lumia 640 features an 8MP rear camera with LED flash, which is able to shoot 1080p videos, while there is 1MP selfie at front to shoot 720p video.

The phone comes with single and dual-SIM options with 3G and LTE connectivity. There is a 2500 mAh battery to power on the new Lumia phone.

The Microsoft Lumia 640 will be available in a variety of colors, including Orange, White, Black, and Cyan. The Lumia will go on sale starting April for the price of €140 (3G version), while the LTE version will cost €160.

The Microsoft Lumia 640 XL phablet comes with a a 5.7 inch IPS LCD display with 720p resolution (259ppi) and Gorilla Glass 3 protection. The phablet uses a Snapdragon 400 chipset with a 1.2GHz quad-core processor, paired with 1GB of RAM. There is 8GB internal storage, expandable up to 128GB via microSD card, and a 3,000 mAh battery to keep live the device.

The Lumia 640 XL features a 13MP rear camera with 1/3″ sensor and LED flash, while it has a 5MP wide-angled selfie at front. Both the cameras are able to shoot 1080p video.

The Microsoft has given a impressive price tag at €190 for the 3G variant and mere €220 for the 4G LTE model. The XL version also comes with single and dual-SIM options.

There is one year subscription of Office 365 with the purchase of either version of Lumia 640. In addition, you will get 60 Skype minutes per month to make calls.

The smartphones will be available in early next month through T-Mobile (US and UK), AT&T, EE, Orange, Carphone Warehouse, O2, Telefonica, and MetroPCS.