A new rumor is doing the rounds over the internet with an image of yet to be announced Microsoft Surface Pro 5. The image was spotted on an alleged Microsoft’s French website belonging to none other than Microsoft. However, there are no means to verify that the render titled “win10-feature-surface-pro-5-z” is actually that of the Surface Pro 5, and the portal does belong to Microsoft. 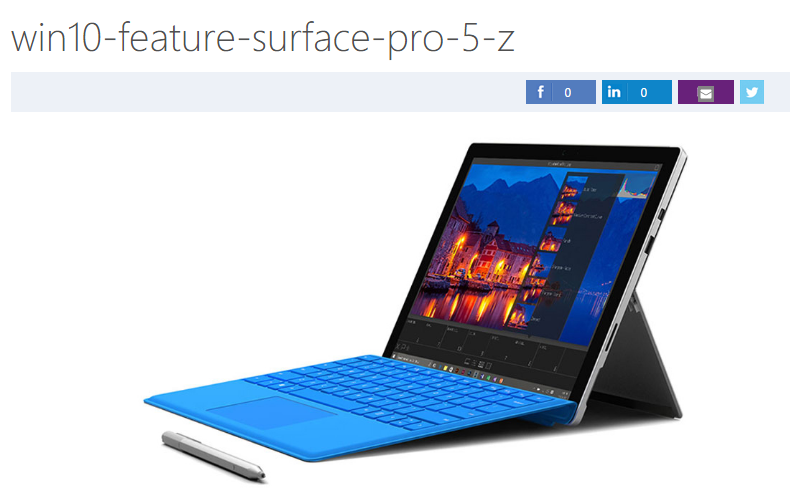 In the image, one can notice the next-gen Surface Pro slate wearing a Type Cover with the Surface Pen lying in front of the tablet. The Surface Pro 5 looks a lot like Surface Pro 4 from last year. It seems Microsoft is planning to stick with the tried and tested exterior rather than ridicule changes.

Along with that, the Surface Pro 5 name appears on a LinkedIn profile of a Microsoft employee by WinCentral. There is also the mention of Neon, a code name given to a visual design language for Windows to be deployed across various platforms.

Just to remind, the Surface Pro 4 was released on October 6, 2015, more than a year ago. If Microsoft does launch the Surface Pro 5 in March or April, it will be a complete one and half year gap between the Pro 5 and Pro 4. In smartphones arena, this is almost twice the gap between successor and predecessor. However, Surface Pro is an elite tablet, so a bigger upgrade cycle is more than obvious.

The Surface Pro 5 from Microsoft is rumored to be powered by an Intel “Kaby Lake” i7 processor with differents variants of RAM and Storage combo. It will have improved Pen to go along the upgraded two-in-one tablet. Microsoft is also expected to make some changes to the Surface Pro’s keyboard cover.

As for the pricing is concerned, Surface Pro 5 is expected to start at $899, with extreme version going as high as $1599.

However, all these news pertaining to Surface Pro 5 still remain a rumor, as Microsoft hasn’t announced anything yet. We will update this space once more info surfaces.