A new Windows 10 Build 14352 for PC is now seeding to Fast ring members on the Windows Insider program. 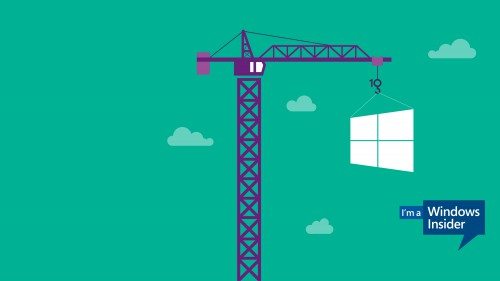 The same was revealed in a tweet by Gabriel Aul, the head of Windows Insider. You can head into settings update menu to check for the update manually.

The new build comes with a ton of improvements and fixes to the preview OS. Following is a brief run of that:

Feedback Hub should now be localized properly. If you install a different language, you will need to relaunch Feedback Hub to have it show in that language.

Starting with this build, pinned tabs in Microsoft Edge should no longer get lost after updating to a new Insider Preview build.

We fixed an issue that caused the Brightness Quick Action to appear missing.

This build includes fixes for Precision Touchpads. We have Improved reliability of using gestures to switch between virtual desktops. We also improved touchpad responsiveness for pans and two finger taps. We also fixed an issue where swiping on the touchpad might not wake the device once it was in Connected Standby state.

We fixed an issue resulting in maximized UWP apps slightly overlapping the taskbar if taskbar was positioned on top.

We fixed an issue in the Action Center where it wouldn’t show the hover state when moving your mouse over notifications if a notification had been expanded.

We fixed an issue resulting in missing icons in Action Center when using Light mode.

We fixed an issue resulting in “Restart Required” continuing to show in Action Center after restart has already occurred.

Increased hit target of X icon for notifications in Action Center, to make them easier to dismiss.

We fixed a timing issue where the Bluetooth Quick Action might appear (with state ON) for a device with no Bluetooth.

We fixed an issue where using Esc to exit a full screen video with Microsoft Edge maximized would result in the window becoming unmaximized.

We fixed an issue where playing mp4s from a network share in the Movies & TV app would sometimes show an “MF_E_UNSUPPORTED_BYTESTREAM_TYPE” error.

We fixed an issue that resulted in the volume mixer slider for system sounds getting reset to 100% after receiving a notification or altering master volume.

Update notifications to now deep link straight to Update History, rather than the Windows Update landing page in the Settings app.

We fixed an issue where theme settings were not roaming correctly to other PCs with the same Microsoft account.

We updated the Action Center icon to now hide unread notification count when the taskbar is using small icons, as there’s not enough space to display it.

Fixed an issue with Command Prompt where it wasn’t keeping the current line in view after resizing the window.

We fixed an issue that resulted in the User Account Control dialog sometimes appearing behind other windows instead of in the forefront.

We fixed an issue resulting in the Lock screen sometimes not showing the Caps lock warning when Caps lock was on.

The known issues list is a lot smaller compared to the fixes and shows the progress Microsoft is making towards the Anniversary update slated this summer. Following are the known issues with Windows 10 Build 14352 for PCs.

Previously installed extensions for Microsoft Edge may not work for around 15 minutes after your first sign-in. A work around for this is to manually re-install each extension from the Store.

In some cases, the new Cortana features highlighted above may not work. Restarting your PC should fix the issue and get the features working.

Using the keyboard to navigate in certain Store apps like Netflix or Tweetium does not work. You will need to use your mouse.

In case you are running the insiders build, we highly recommend to updating this one sooner than later. For issues other than the one reported above, you can use the Windows Feedback to help Microsoft make the OS more refined in future builds.