According to a report by The Verge, Microsoft has already started sending out invites for an event dated 6th October to be held in New York. As you can see from the image below, the media invite clearly says that the new Windows 10 devices are going to be revealed. 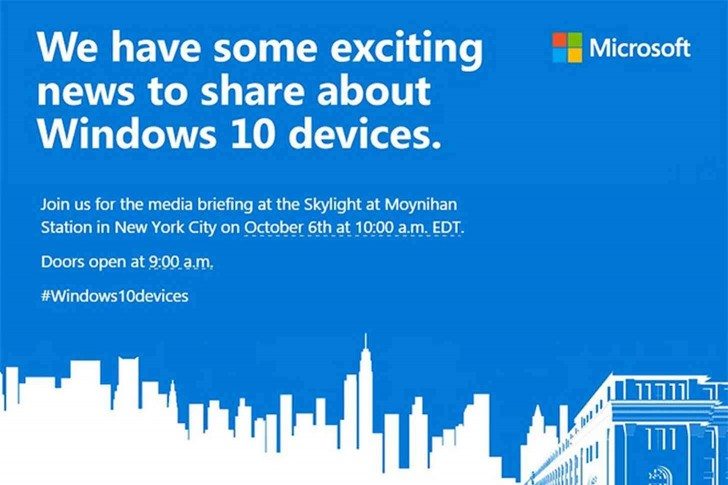 Previous rumors and leaks revolving around Microsoft have been centered on the Lumia 950 and Lumia 950 XL flagship smartphones launching officially in October. So now we know that the rumors are true and the official date is 6th October.

Apart from the much-awaited high-end Lumia brothers, Microsoft will apparently be unveiling a new tablet too, supposedly the Surface Pro 4 tablet alongside a new Band 2 wearable.

If rumors are to be believed, then we would be witnessing the launch of a bigger Surface tablet this year at the event. There is a possibility of the tablet getting a 14-inch touchscreen, though it is unclear if the tablet is ready for the upcoming event.

We expect the Surface Pro 4 to keep the charging mechanism and form factor of its predecessor while including some new upgrades. The tablet will likely be lighter and thinner than the Surface Pro 3 and may also get a fingerprint sensor.

As for the Lumia brothers, the Lumia 950 and Lumia 950 XL were spotted in official-looking renders last month. Both the phones will flaunt QHD resolution screens, 3GB RAM, 32GB expandable storage, a 20 MP PureView rear camera, a 5 MP front camera, and a USB Type-C port for charging. The 950 XL will get Qualcomm’s Snapdragon 810 chipset and bigger a 3,300 mAh battery, while the Lumia 950 will sport a Snapdragon 808 SoC and a smaller 3,000 mAh cell.