Microsoft announced its mid-ranged smartphone Lumia 435 in the January 2015. The device is now been listed for pre-order at Amazon UK. The phone is available in Orange, Green and Black colors and priced at £88.49 (SIM-free). Amazon has also disclosed the shipping date, that is March 1, a month from now. 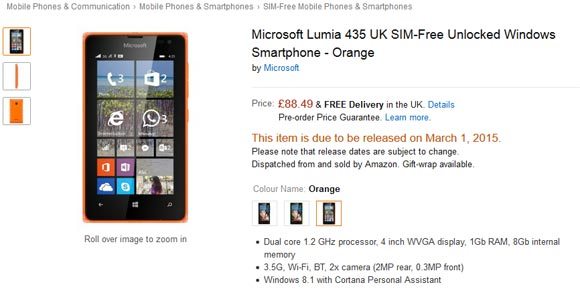 Microsoft Lumia 435 is a budget friendly smartphone and packs a 4.0 inch LCD display, 1 GB RAM and 8 GB internal storage. It is powered by a Snapdragon 200 chipset with a dual-core processor. A 1560 mAh battery placed at rear with 12 hours talk-time on 3G network while 21 hours on 2G.

Microsoft is planning to release the device throughout the Europe, Africa and Asia in the month of February. The Lumia 435 is also planned for Windows 10 upgrade.