Microsoft recently released the Windows 10 Mobile after a long wait. It was received with mixed feelings and emotions by the Windows community. While many were relieved to finally receive the update after such a long wait, others were utterly disappointed with the fact that many Windows phone devices were left out.

One such device is the BLU Win Jr LTE which is left behind despite the fact that Microsoft had advertised it as ‘upgradeable to Windows 10 Mobile’ on the official online store.

Various forums were filled up with complaints. Interestingly, Microsoft took heed to it, but in spite of planning to roll out the update for this device, it has changed the description of the BLU Win Jr LTE device in the Windows Store which now states that the BLU device will support Windows Phone 8.1 only. The description was changed in a hush-hush way, hoping that it wold go unnoticed. But sadly for Microsoft, it didn’t happen. 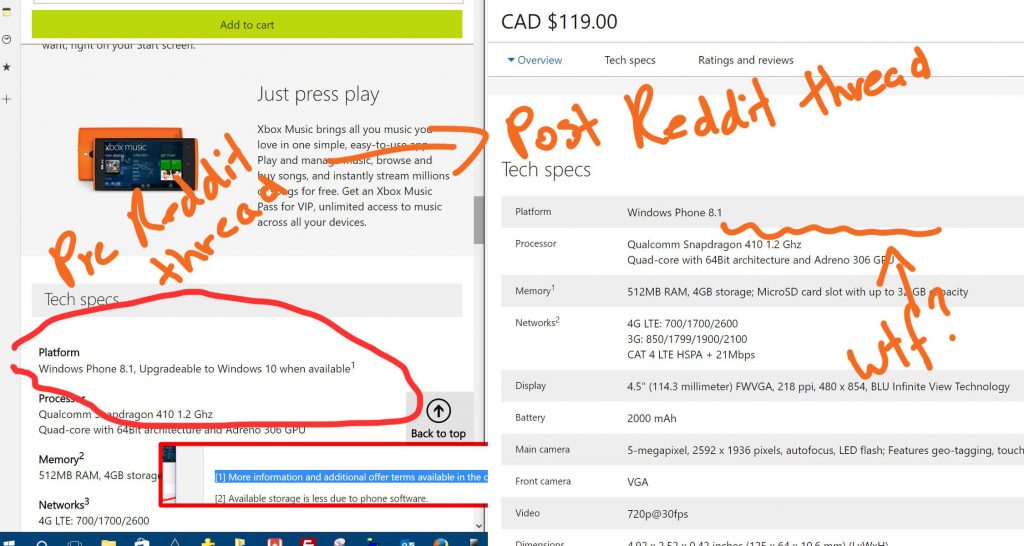 Since the Microsoft has confirmed that the BLU device won’t get the update, complaints have been pouring in on Reddit (via WinBeta) in a large number.

Most of the buyers had purchased the BLU device only in the hope that it would receive the Windows 10 Mobile update and they are currently feeling deceived and dejected.

The Redditor who spotted this change in description and started the discussion said, “I received no official word from anyone at Microsoft – instead they chose to silently update the page and tell no one. This is SO shady.”

The question arises here whether this is a false advertising or not. We can’t answer that but for sure Microsoft should have been more careful while listing its products. It has indeed broken the trust and hearts of thousands of its loyal fans by leaving so many devices out of the Windows 10 Mobile upgrade rollout and especially the models with less than 512MB of RAM.

Microsoft needs to address this issue properly and deal with these complaints which have been flooding in since the rollout. Microsoft in no way would like to lose its loyal fans and thus should make some amends. However, this doesn’t seem to be happening soon as there is no second wave of update rollouts as far as we know right now. A lot of devices have got the Windows 10 Mobile update, but is Microsoft playing with other Windows Phones?

This is it, for now, stay tuned for more news and info and do leave your comments below.