MobiPicker
News Micromax Unite 3 Q372 with Android Lollipop launched in India at INR...
Share on Facebook
Tweet on Twitter
Deal Alert: 49% Off on ExpressVPN
Touted as #1 VPN in the world, ExpressVPN is now offering 49% off & an additional 3-months of service on its annual plans.

Micromax has launched a new mid-ranger handset in its Unite series, dubbed Micromax Unite 3 Q372. The company has partnered with Firstouch for the messaging service which allows users to translate and transliterate with patented ‘Swipe’ attribute for easy communication in their choice of language. The new unite handset comes with 10 pre-loaded regional languages, which includes, Hindi, Punjabi, Gujarati, Telugu, Oriya, Kannada, Marathi, Malayalam, Tamil, and Bengali. The handset is available in white and blue colour and is priced at INR 6,999. On purchasing the Unite Q372, Vodafone is also offering 500MB 3G data for two months. 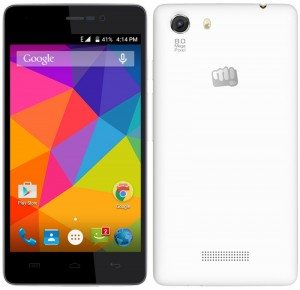 For the price tag of INR 6,999, you will get a smartphone with 4.7inch IPS display, which supports dual SIM with dual standby. Powered by a MediaTek MT6582M chip with 1.3GHz quad-core processor, the Unite 3 Q372 packs 1 gig of RAM, 8GB of expandable storage,  an 8 megapixel rear snapper, a 2 megapixel front camera, and a 2000mAh battery.

The new unite smartphone runs Android 5.0 Lollipop out of the box and includes 3G, Bluetooth, GPS, and Wi-Fi b/g/n for connectivity options.