Li Nan, Meizu’s VP, has already given us the confirmation that the MX5 Pro won’t be coming out and that they will be scrapping the MX Pro line altogether. The company has, however, admitted to be working on a new premium device/series.

Having said that, we have already witnessed a good deal of Meizu NIUX leaks till now. A few hours ago, we told you that the NIUX may be called the Meizu Pro 5, as suggested by a leaked photo of the packaging, and that it might be unveiled on September 23. In a development now, Meizu has sent out the invites for the event and pictures of the invite have been posted online. 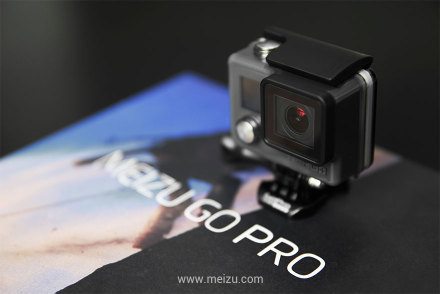 As you can see in the picture, the box has a GoPro-like camera. While this may look odd, Meizu has a reputation of sending such invites. Previously, it has sent out invites showing the back cover of the iPhone 5c and an old Nokia phone, and now its the GoPro. Could this new invite be hinting that Meizu may be planning to launch an action camera? Well, it isn’t impossible, is it?

In other news, the upcoming Meizu flagship, the Meizu Pro 5, will have a 5.5-inch 1080p display with a resolution of 1920 x 1080. Also included in the phone will be a 3/4GB of RAM (two variants may be launched) along with 32/64GB of internal storage. The 3GB RAM-variant will come with 32GB of internal storage, while the 4GB RAM-variant will have 64GB of it. Powering the device will be Samsung’s Exynos 7420 64-bit octa-core processor, which is said to be the best CPU available by Meizu’s President. A 21MP rear and a 5MP front camera will take care of the photography, and the Meizu flagship will come pre-loaded with Android 5.1 with Flyme UI running on top of it.

If Meizu really is launching a camera along with the Meizu Pro 5, it will be a big change for the manufacturer. We can hardly wait to find out!