The Meizu PRO 6 has been launched officially and is the first phone to come with a deca-core processor. Powered by MediaTek Helio X25 clocked at a maximum of 2.5GHz, the phone gets 4GB of RAM and 32GB/64GB of internal storage. Of course, the CNY 2499 ($386) price tag might seem too high to some people. But if you are one of them, there might be a cheaper variant of the phone coming soon. 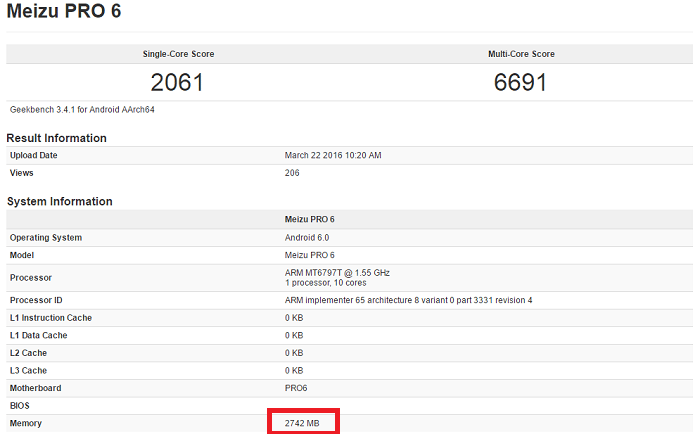 A new version of the Meizu PRO 6 has been spotted by MyDrivers on Geekbench today. This smartphone is carrying 3GB of RAM instead of the 4GB RAM that the newly-launched Meizu PRO 6 has got under its hood. The processor remains the same, and the performance is quite good too. The phone scored 2061 in single-core test and 6691 in multi-core test, which is surprisingly slightly better than the current PRO 6.

Do note that this Geekbench test was done on 22nd March, after which the phone apparently did not appear again on the website. This means that it might just be a prototype that the company might be working on to launch a lower-specced version of the Meizu PRO 6.

It can’t be said whether or not the cheaper PRO 6 phone will be launched or whether it will be launched sooner than later. If the 3GB variant of the Meizu PRO 6 is launched, it might be priced around CNY 1,999 ($308 approx).