A new entry in the database of GFXBench suggests that Meizu might be rolling-up its sleeves to come up with a smaller, more compact alternative to the Meizu m1 metal. However, it will be a trimmed down version of its elder brother, unlike the high-end yet compact OnePlus Mini and Xperia Z5 Compact.

The phone we are talking about is codenamed as Meizu M57AC Blue Charm Metal in the benchmark result. The device gets a MediaTek MT6753 chipset under its hood, while its elder sibling gets a more powerful MediaTek Helio X10 SoC. 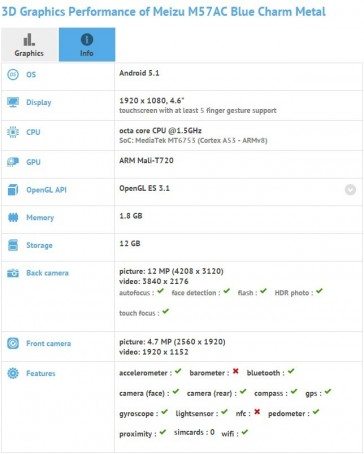 It is being said that the metal mini will feature a 4.6-inch Full HD screen. Memory-wise, the phone will get 2GB of RAM and 16GB of onboard storage. There will be a 13MP camera at the rear with 2160p video recording, which is definitely an error as the Helio X10 chip does not support that resolution.

Before this, we heard about the Meizu PRO 5 Mini coming soon for just $315. The PRO 5 Mini seems to be different from the Meizu Metal Mini. The rumored PRO 5 Mini might come with 3GB RAM, Helio X20 chip, and 4.7-inch screen.