We have recently covered details about the Meizu Blue Charm Metal (code-named m57a in TENAA database). Now, new information has surfaced regarding the metallic cover of the phone.

According to a Chinese Weibo page, the phone’s metallic cover will be made of a special magnesium and aluminium alloy, as you can see from a Meizu-related picture of the periodic table, indicating the equivalent of Mg and Al. 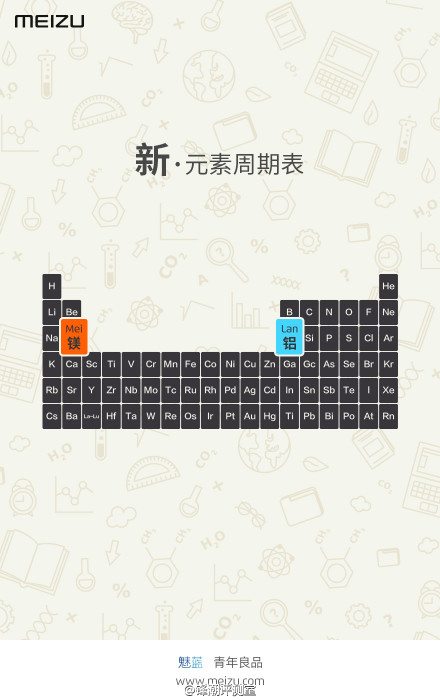 The Meizu Blue Charm Metal’s cover is rather complex, and if our translations are accurate, it has 3 layers in the following order, plastic – metal – plastic, and then perhaps the 4th layer is he paint sprayed onto the unibody. Which means that the Magnesium-Aluminium alloy is integrated between two plastic layers.

The post also shows some images of the phone and its cover, in various colors, including pink, mid-blue, champagne-like, gray (or graphite) and white. We are actually impressed by the range of colors offered by Meizu and they seem suitable for any gender.

As we discussed in a previous article, the Meizu Blue Charm Metal is most likely to be released with a 5.5-inch Full HD display, an octa-core CPU and 2GB of RAM. Its on-board storage will be 16GB that can be expanded up to 128GB through microSD. Camera-wise, the Meizu phablet will come with a 13-megapixel primary and a 5-megapixel selfie unit. Regarding the OS, it will probably not be Android, but the Alibaba Yun OS.

The Meizu Blue Charm Metal (m57a) is definitely a phone to look out for, and we will hopefully find out more about it on 21 October when more details are said to be officially revealed.

Forget Samsung Galaxy S8, Galaxy Note 8 Could be a League of Its Own