AMD rolled out its new lineup of Radeon Instinct GPUs for deep learning and artificial intelligence earlier last week. The lineup comprises multiple contrivances including the likes of MI25, all powered by Vega, AMD’s most advanced graphics architecture till date. Among all the newly introduced GPUs, one particular unit that appears to be particularly fancy was demoed on stage by Raja Koduri, head of Radeon Technology Group. 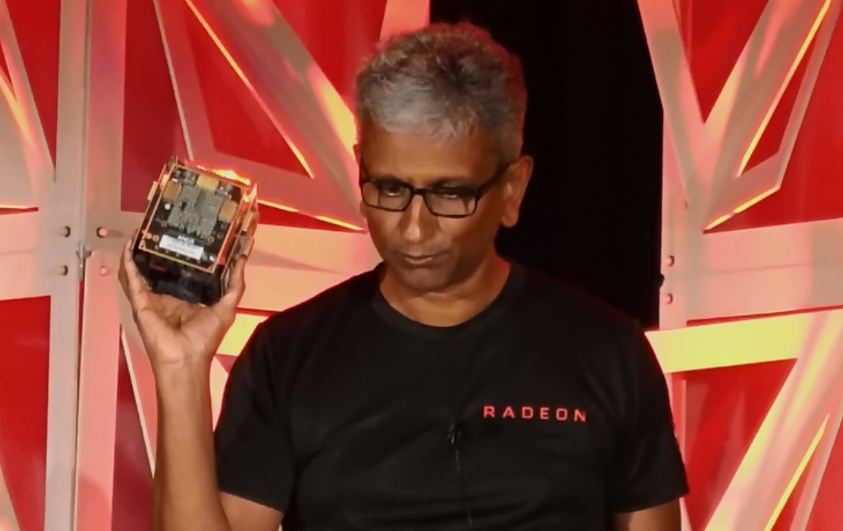 Said unit was a small, 4 x 3 inch, quad GPU cube boasting 100 TFLOPS of FP16 compute and 50 TFLOPs in FP32. Just to put that into perspective, the liquid cooled Drive PX2 AI supercomputer from NVIDIA meant for self-driving cars delivers 8 TFLOPS of FP16 compute. That’s more than six-times less than that of the Vega cube.

More impressive is the fact that while NVIDIA’s Drive PX2 is a massive box designed to go inside a car’s trunk, the Vega cube can easily fit into the palm of your hands.

The prototype displayed by Koduri consists of four Vega 10 graphics processors, each carrying a little circuit board. Vega cubes can be stacked up one atop the other in a vertical alignment using a unique interface. This aspect could potentially come handy in developing supercomputers many times smaller than what we have today.

However, AMD definitely has its task cut out when it comes to providing an adequate cooling solution to such a dense piece of hardware. Especially given the fact the Radeon Instinct MI25 accelerator, powered by a single Vega 10 chip, has a TDP rating of 300W. Of course, liquid cooling would be the way to go about this seemingly herculean task — something NVIDIA resorted to with the Drive PX3 box.

Worth noting, we have previously seen AMD taking its liquid cooled, Fiji-powered 275W R9 Fury X all the way down to 175W in the form of the R9 Nano. In terms of performance, R9 Nano was only 15% inferior to its older sibling. With that in mind, it is likely that AMD will roll out a power-optimized variant of Vega 10 with reduced clock speed sometime in the near future.