More than the amount of RAM, it’s the amount of power that the chipset in the smartphone packs. Owing to this, major chipset manufacturers are constantly battling to bring out the best SoCs in the market, and one of those major players is MediaTek. The company has unveiled the new MediaTek Helio P20 chipset at the MWC 2016, thus expanding its P lineup of SoCs. 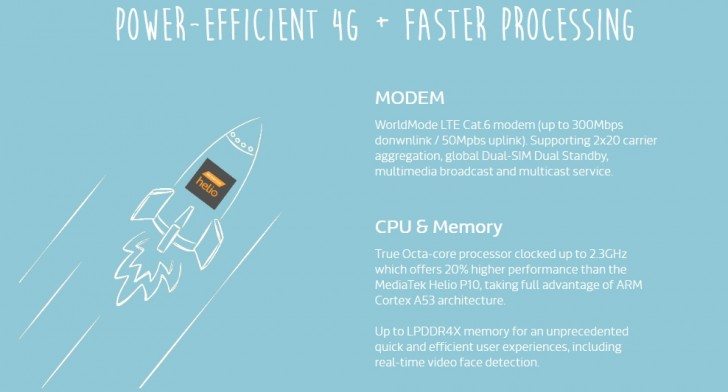 The Helio P20 is a huge upgrade over the Helio P10 and the main pocus is on the power efficiency, which has improved greatly. The new chipset uses 25% less power than its predecessor while also increasing the performance. When using an octa-core ARM Cortex A53 setup, the chipset clocks up to a maximum of 2.3GHz, while the Mali T800 GPU clocks a good 900MHz. The chipset is the first mobile chip in the world to support LPDDR4X, which uses 50% lesser power than LPDDR3 and offers 70% more bandwidth.

MediaTek designed the MediaTek Helio P20 to meet today’s consumer demand for sleek and powerful yet highly power-efficient mobile devices … Consumers place increasing importance on the battery life and multimedia capabilities of their smartphones. MediaTek has risen to this challenge with a leading solution.

The other MediaTek Helio P20 specs are equally nice. The chipset can support two FullHD screens (both at 60 fps). Also, it supports a single rear camera of up to 24MP, or a dual setup of up to 13MP+13MP with video recording up to the resolutions of 4Kx2K at 30FPS.