A fighting game like Marvel vs Capcom Infinite would be great to see release on the Nintendo Switch. Fighting games like Pokken Tournament, Street Fighter, Marvel vs. Capcom, Tekken, Mortal Kombat, etc, could do really well on the Nintendo Switch. Especially with the whole concept of the Switch being both a home console to play all the games in high-quality 1080p (Or possibly 4K) at 60fps from the TV. And a Portable system to continue playing the same game anywhere on-the-go at any time. With no type of restrictions whatsoever.

Marvel vs Capcom would play great on the Nintendo Switch

Just like it was shown in the Switch reveal trailer with those guys playing NBA 2K together and Splatoon together portable. You can play portable together from your own separate screens with each other or against each other. Heck, this idea can work for many different games of any genre’s on the Nintendo Switch. Fighting games, Shooters (1st Person and 3rd Person), Sports, Racing, Hack-And-Slash Action games like Hyrule Warriors, MMORPG’s, etc. You have both the console experience and the portable experience. 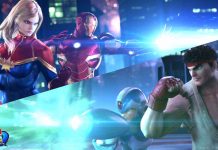 Marvel Vs Capcom Infinite Wishlist – Everything We Want From The Game