Mafia 3 has been out now for almost two weeks. Chances are most of you guys have already completed it. A lot of you are probably getting bored now because you’re done with the story and everything it has to offer. If a lot of you are thinking of trading it then don’t because it might get some pretty important updates soon.

Could Mafia 3 get multiplayer as part of the next update

It’s already confirmed that there’s more content coming up. There’s paid as well as free post-release content as well. It’s going to improve the game quite a bit. One important content update is related to races. If you check out the Mafia 3 website they said free races will be added to the game in an upcoming update. However, they haven’t said when and what will be the exact specifics.

At the moment, online isn’t featured in the game. But the devs have said they will be adding free new weapons and vehicle optimization as well. Races and the ability to change Lincoln’s clothes will also be added. As for the multiplayer, we think it’ll be cool if they introduce it because, like GTA 5, very few people bothered going back to teh story and were heavily invested in multiplayer.

Let us know your thoughts on Mafia 3. Are you enjoying the game? Will you be willing to play it a lot more if multiplayer is introduced? Let us know in the comments. Stay tuned to MobiPicker. 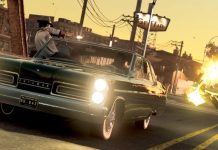