Contrary to the recent speculation saying that Apple is losing market share and its popularity, the company’s upcoming products are creating a lot of buzz in the smartphone as well as the notebook industry. We already know that the iPhone 7 is going to be a significant if not a major milestone in the iPhone lineup. But now it’s time to talk about the much-awaited MacBook Pro 2016 laptops that are rumored to be unveiled at the upcoming WWDC event.

A lot of leaks and rumors have suggested that the MacBook Pro lineup will get a major overhaul this year with a lot of upgrades and major changes. The latest leak comes in the form of some new renders created by popular artist Martin Hajek who is known for producing close-to-accurate renders for Apple products. These new renders demonstrate an OLED screen that replaces the function keys on the top of the keyboard.

AppleInsider reported that Hajek released some new renders suggesting what the rumored OLED touchscreen panel in the 2016 MacBook Pro could look like. The feature was first suggested by well-known analyst Ming-Chi Kuo of KGI Securities, China. As you can see in the images above, the OLED screen displays notifications and controls for apps that are running in the background. The displays can act as the function key row when needed and can be used for various purposes like showing WiFi connection, battery indicator, etc. 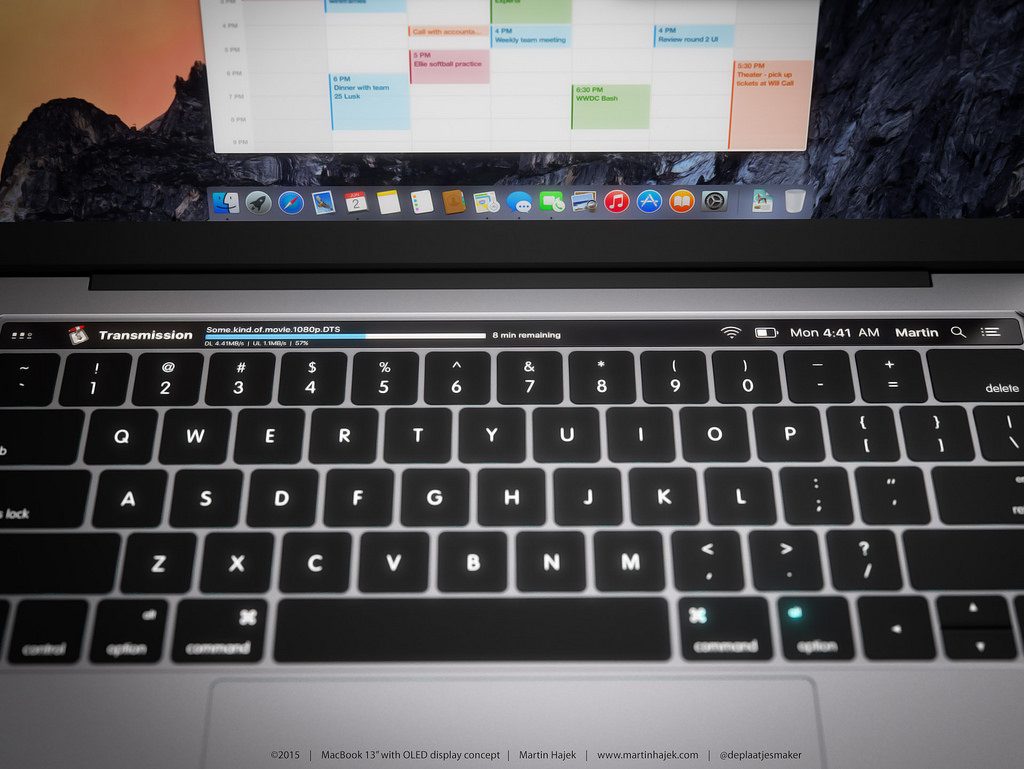 According to a DayHerald report, the MacBook Pro 2016 will come in 13″ and 15″ models and will be getting a thinner and lighter design. The laptops will come with USB Type-C ports and Thunderbolt 3. Rumors also say that Apple might add support for Siri and Touch ID in the new MacBooks, but no strong leak related to that has come out yet. The new laptops will be powered by Intel’s 6th gen Skylake processors and will be faster and speedier with better battery life than the MacBook Pro 2015.

Meanwhile, a report by BGR says that the new MacBook Pro will be thinner, and hence it will need a different type of hinges. The report tells us that Jarllytec, hinge-maker, might be producing special metal injection molding (MIM) hinges for Apple. These MIM hinges might get used in the new MacBook Pro models. This metal molding process helps produce small, complicated metal parts to help make the device slimmer.

As for the MacBook Pro 2016 release date, it was earlier being said that the new notebooks might get unveiled at the WWDC 2016 that is going to be held in a few days. However, a new GottaBeMobile report suggests that the launch of the 2016 MacBook Pro laptops has been pushed to the fourth quarter of this year.

So yes, it is not confirmed yet whether or not we will see the new MacBook Pro at the WWDC. Let’s wait for the event to unveil the truth. Stay tuned!