Recently Satya Nadella, CEO of Microsoft said “If nobody wants to make Windows phones, we will make them ourselves”, which assures the company’s commitment to the rumoured Lumia devices codenamed as Talkman and Cityman. According to the sources, there will be transformational changes in the nomenclature of the new Lumia devices which will run on Windows 10 Mobile.

Dubbed as Lumia 950 and Lumia 950 XL, the new phones will break the logical chain and take a jump from Lumia 930 and skipping the 940 series. Important to note, similar jump is also seen in the nomenclature of recently released Windows 10 direct from Windows 8, so we can expect this is a thoughtful move from the Microsoft rather than an abrupt change. The new Lumia devices are assumed to coming with a slim metal body and also expected to have the USB Type C omnidirectional connector. These devices are expected to be announced in October and will release in November, just in time before the yearend holidays. 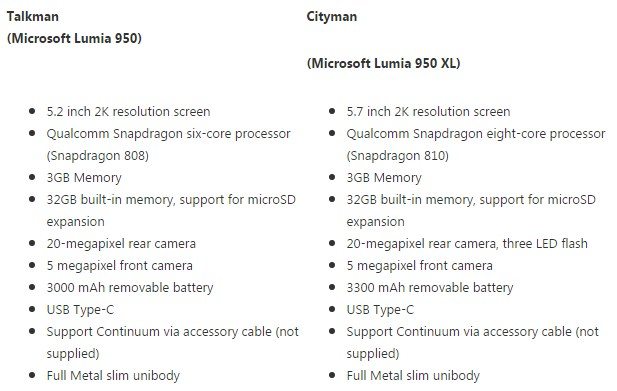 Both the lumia devices will have 20MP cameras which will be a transformational improvement over the current ones. Another leakster Ricciolo posted some of the alleged images taken through a prototype of the handset dubbed as “WP10”. He also stated that the device will have an improved optical image stabilization for better picture quality. However he has put a caveat on the same by saying the image has been taken with pre-release firmware so the quality may not be the same when the device reaches the market. Nevertheless, the point is we are inching towards seeing the new Lumia devices soon.