The long awaited Windows-based flagship phone, Microsoft Lumia 950 and the Lumia 950 XL, have been a hot topic since a couple of months. But the recent leak is not less than an official announcement, as the company has inadvertently posted both the devices on one of its official retail websites, specifically at the U.K. web store. Though the listing has now been taken down, we were lucky enough to grab some screenshots. 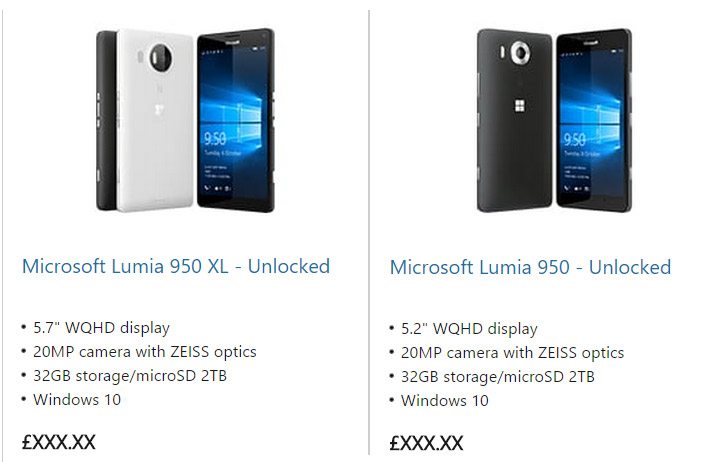 According to the listing, the smaller Lumia 950 has a 5.2-inch display, while the XL version gets a larger 5.7-inch display. These are the first devices from the company to feature QHD resolution as well as Windows 10 Mobile out-of-the-box.

It is evident from previous releases that high-end Lumia devices always offer an unbeatable photography experience, and we can expect the same from forthcoming models with their 20MP primary snapper featuring ZEISS optics. In the memory department, there is 32GB storage space, with an option to expand it with a microSD card.

Though we have come across the key features officially, the prices of the Lumia 950 and Lumia 950 XL are still not known. Thankfully, it is not a long run from here, as the company has scheduled an event in NYC on October 6th, where it will announce both the flagships along with Windows 10 Mobile.

Are you excited for high-end Lumia smartphones? Share your excitement in comments below!