An unannounced LG smartphone was spotted in the database of the GFXBench benchmark site. As of now, the phone is known only by its version number, H740.

Given to the leaked specifications, the LG H740 seems to be an upcoming mid-ranged phablet. Sporting a 5.7-inch 1080p touchscreen, it features a 12 or 13 MP rear camera with LED flash, and a 5MP front-facing shooter. Both the cameras support 1080p video recording. Other features include a 2GB RAM, 8GB of built-in storage, Wi-Fi, NFC, GPS, Bluetooth, an accelerometer, a compass and a pedometer. 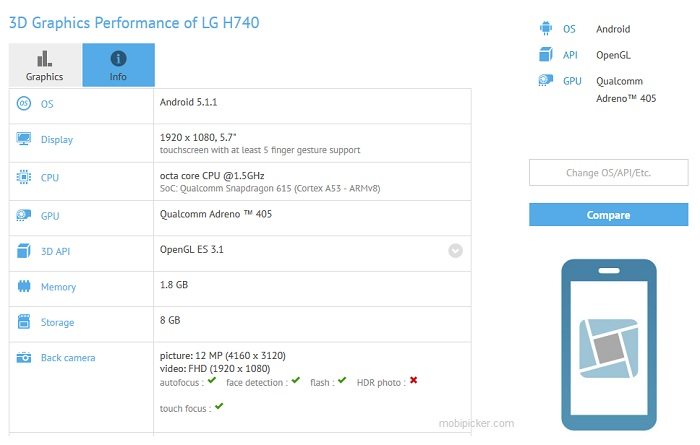 Running the Android 5.1.1, the phone is driven by Qualcomm’s Snapdragon 615 chipset with an octa-core 1.5 GHz Cortex-A53 processor, and the Adreno 405 GPU.

As reported earlier, the Korean company has scheduled an event for October 1st in New York City, during which it is likely to showcase its new flagship phone, the LG V10. There are chances that LG will also launch the mysterious H740 in the same event.

However, there are still 15 days to go until the event and we hope to receive more information on the device during this time. Stay tuned!