We have been updating you daily about the Marshmallow update being rolled out to several major smartphones. LG has been of the most active OEMs regarding this update, and if you own the Verizon LG G3, there’s some good news for you. Yes, you guessed it right, the Android 6.0 Marshmallow update is now being rolled-out to the Verizon version of the LG G3. The news was confirmed by a Reddit user called Jrdnram_98 who posted a screenshot of the OTA notification. 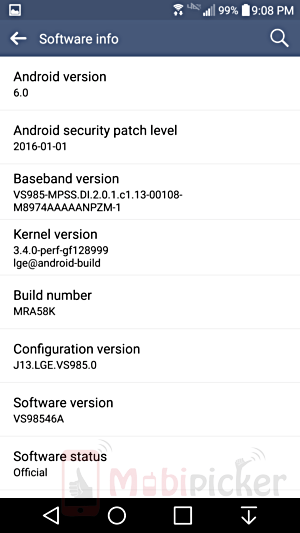 The Reddit user claimed that he received the notification just a few hours ago. As you can see in the screenshot above, the update comes with the build number MRA58K and the software version now bumps up to VS98546A. This Marshmallow update also brings the security patch for January. But is this news real? Yes, we do believe that it is real, even though no one else who commented on the Reddit thread seemed to have got the update on their G3.

In late December 2015, LG had started seeding the Android 6.0 update to the LG G3 phones in Poland. If you have been following the news lately, you would know that the European country has been a test bed for LG’s software updates for quite some time now. After the update is successful in Poland, it is rolled out to other regions of the world.

Talking about the LG G3 Marshmallow update, it was earlier rumored that the phone would get the update on 14th March. And now that Verizon has offered the update for the handset on its network, we think that the March 14th date is for the international roll-out of the update.