Gone are the days when the companies enjoy the first mover advantage for years, now with the advancement in technology and information available in public domain, this feat. Is enjoyed for few hours or may be days or couple of months. Last year the Korean giant Samsung has introduced an innovative concept device dubbed as Note Edge which has replaced the side wrapping around the bezel to give way to a secondary display on the edge, thus the name coined Note Edge. A couple of months after its introduction, following the concept of display on the edge, LG has quietly given a demo in CES 2015 where LG went step ahead from Samsung and introduced the display on two edges. 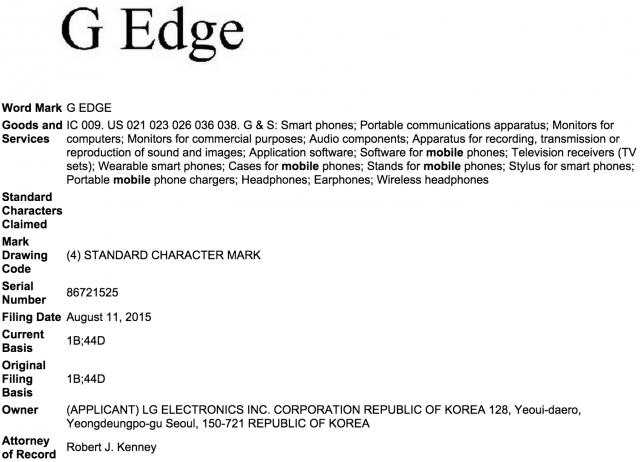 Till that point of time it was a concept and was a prototype where it was trying to figure out some more innovative use of the screen on the edges; however the Note Edge also seemed to show the potential of this feature. It seems that LG has found a way to provide that and has gone a step further by filing for a trademark with 8 different names containing the word ‘Edge’. These names are Super Edge, Dual Edge, Upper Edge, Dual Side Edge, Side Edge, Double Edge, Two Edge, G Edge. The information has been received from Phandroid, a tech website.

Whether the trademark for 8 different names filed by LG, means the manufacturer is having plans to rollout 8 different devices or is it just for a name. Well what all we know is that the process for filing trademark is a costly affair, and if the device gets released and is a hit then the manufacturer will race to the top else it will fall to bottom.

The process of trademark is a long and tiring one but it may take time till the end of next year 2016 to get this point sorted out. Till then we will keep you posted on the latest news.