Lenovo started teasing its upcoming budget killer, the Lenovo K4 Note, last week. The phone is a sequel to the much loved Lenovo K3 Note. The K4 Note will be competing directly with the recently launched Xiaomi Redmi Note 3.

Well, the company has been teasing the Lenovo K4 Note every now and then. And today, in a tweet, Lenovo has confirmed officially that the Lenovo K4 Note will be packing 3GB of RAM under its hood. Well, that’s a good improvement, as the K3 Note came with 2GB of RAM. 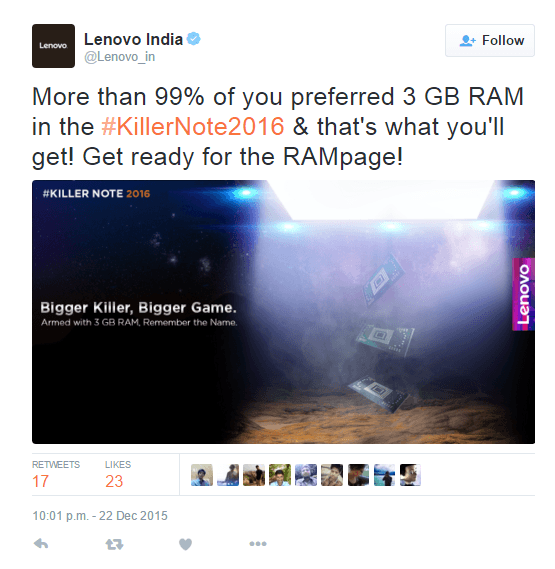 Some rumors also suggest that the K4 Note will come with 32GB onboard storage, which would be double than that in its predecessor. The K4 Note will be featuring a metal body, and it would not be wrong to expect a fingerprint scanner too. Going by the trend nowadays, it is highly possible that the phone will run MediaTek’s Helio X10 SoC.

The Lenovo K4 Note is rumored to be launching in January 2016, suggested by the fact that the company has been teasing the phone rigorously. Though it’s not confirmed yet, but the K4 Note might be unveiled at the CES.