MobiPicker
News Lenovo K4 Note is Already Selling in Saudi Arabia!
Share on Facebook
Tweet on Twitter
Deal Alert: 49% Off on ExpressVPN
Touted as #1 VPN in the world, ExpressVPN is now offering 49% off & an additional 3-months of service on its annual plans.

The Lenovo K4 Note was unveiled only a few days ago in India. Being the successor of the highly successful Lenovo K3 Note, the K4 Note is all set to give a tough fight to the Xiaomi Redmi Note 3 and similar devices in the around $200 price range. The K4 Note will go on sale in India on 19th January, and fans are very impatient to get their hands at the phone. However, it feels unfair to know that the phone is already selling in Saudi Arabia. 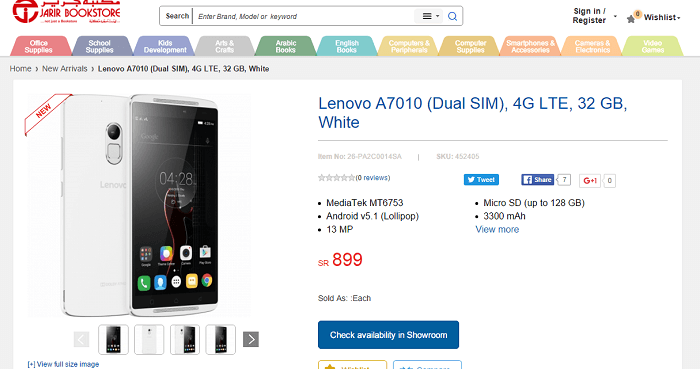 Jarir Bookstore has listed the Lenovo K4 Note on its website, where it has been priced at SAR 899 (approx $240). The phone is listed by the name of Lenovo A7010, but the images and specs confirm that it is indeed the K4 Note. The model in this listing comes with 32GB internal memory. How or why the phone has reached Saudi Arabia so quickly without being released in India first is still a mystery.

In case you don’t know, the Lenovo K4 Note comes with a FullHD 5.5-inch IPS screen. It houses a 64-bit octa-core MediaTek MT6753 chipset with Mali T720-MP3 GPU. The phone gets 3GB RAM, 16GB onboard storage, and a 3,300mAh battery. There’s a 13MP/5MP camera combo, and the phone comes with a fingerprint sensor too.