Most of the players who own Nintendo Switch or Nintendo Wii U would have already played The Legend of Zelda: Breath of the Wild by now. This remarkable game is a unique achievement in so many different ways. But, how does it look on both of the consoles is a question that might surface if you own any of these Nintendo consoles. What’s different on Switch or Wii U? Well, you can have an idea about that by watching Digital Foundry’s latest Video on YouTube. The video explains a lot of differences. It’ll be definitely providing you with the answers to most of your questions.

You’ll see that while in docked mode, on Nintendo Switch Zelda: Breath of the Wild runs on 900p as compared to Wii U’s 720p. In the video, on both of the consoles, the game is Hard-locked at 20p mark for whenever it drops from its usual 30p. This shows a very minimum to not visible difference on both of the consoles. We can also see that at certain points, Wii U’s framerate drops a bit but Switch handles it pretty nice as compared to it.

As we can see in the video above that while on a part of a hill, Wii u loses the framerate but Switch maintains its 30fps rate and the game seems more smoothly running as compared to Wii U. According to Digital Foundry’s video, this happens because of the “Hidden Bottleneck” that suggests that the game’s open world is presented differently on both of the Consoles. 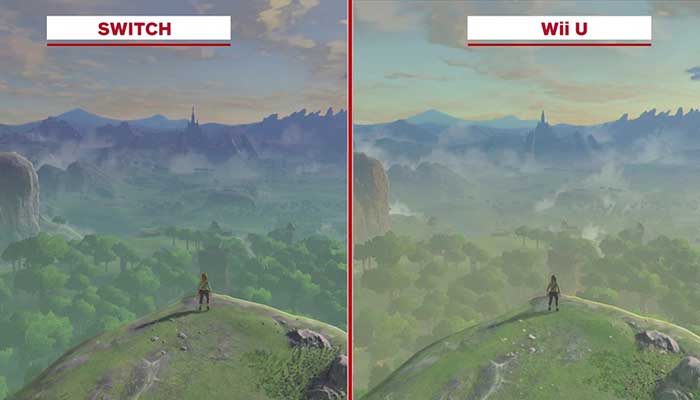 Based on this analysis, the bottom line is that the framerate isn’t actually that better on any of the consoles, but the Nintendo Switch wins this marathon because it’s a bit different on it. This is because Switch is not Docked, it runs the game on 720p. This makes it same to the Nintendo Wii U’s 720p so no difference when compared to Switch Undocked. However, in undocked mode, Switch wins it with fewer hiccups than the Wii U.

While on high resolutions, if the Switch is docked and is outputting it to 900p, it does work slightly better than the Wii U. Digital Foundry explains that “It Improves the Appearance of distant objects, moving transparencies like grass, and cuts down on pixel crawl on geometric edges.” We can clearly see that in Switch, textures are also more filtered if we compare it to Wii U. We’ll find a visible difference at a slightly longer distance. Furthermore, Switch version of the game offers better sound sampling because of it’s higher memory. However, it’s not so different on Wii U as well and this difference is not very noticeable while playing the game.

As the result of a detailed comparison, we’ll see that there isn’t much of the difference between the Nintendo Switch and Nintendo Wii U versions of the game. For all those who love to play the game on their TVs on higher resolutions, Switch offers a number of advantages as well as it suffers from the framerate issues just like the Wii u does. But if you don’t want any framerate drops while playing the game, you can play the game with your Switch Un-docked at a lower resolution. This will offer a smooth gameplay with zero to none framerate hiccups and the image will also appear crisper.

Digital Foundry’s video only shows the gameplay and problems of the first part of the game. There could be more problems at later stages of Zelda: Breath of the Wild. So, if you face any of the problems related to framerate drops, resolution outputs, and stuff, do share them with us.

The Legend of Zelda: Breath of the Wild Guides and Tips

It might be dangerous to go in the game world alone. Any players who aren’t experienced or have a very minimum skill of survival can perish in a matter of minutes or seconds. So to save you from the unimaginable death and possible downsides of the game, we are going to tell you some of the insider tips and guides. Hopefully, they’ll be helpful to you in a very unfamiliar world of Zelda: Breath of the Wild that’s filled with all kinds of challenges and enemies.

Things Zelda: Breath of the Wild doesn’t tell you

In the game, there are a number of different and important technicalities and concepts that the game itself doesn’t tell you. Sometimes, the game somehow throws a bunch of clues at you but most of the time you are left alone to figure out the things. The possible ways to figure out various things could be to complete any of the side-quests or experimenting on things. As the game is full of Secrets, we’ve compiled a list of things that can help you while you are on your journey in Breath of the Wild. Let’s have a look at the List of Guides and Tips about The Legend of Zelda; Breath of the Wild.

1. How To Shieldboard in Zelda: Breath of the Wild

Yes, you can Shieldboard in the game. If you want a fast travel while going down a hill, you can simply use your shield as a board. All you have to do is to Hold ZL to convert your shield into a skateboard. After holding down the ZL, you can simply Jump forward by pressing A and it’ll change your shield into a Skateboard, AKA. Shieldboard. This way you can travel downstream fast, throw arrows at your enemies and perform various tricks by pressing the Y button.

2. How To catch a Horse in Hyrule

If you are a fast traveler and you want tot traverse through the world of Hyrule a bit faster, you can always use a Horse for this purpose. As you won’t have any horse as you start the game, so to acquire one you’ll have to capture one. You’ll find horses in the world of Hyrule in abundance. You’ll see them roaming free in the wild but if you want an easy spot to capture a Horse, you should head to Blatchery Plain.

There you’ll find two types of horses; Spotted and One-Color. Spotted horses are better for the beginners and the One-Color horses are good for advanced levels of the game. So to capture and tame a horse, you’ll have to reach out to it from the back. Once at the right distance, Jump on its back and hit the L button to instantly start soothing it and drop the chances of getting kicked out.  Once you have tamed the horse, you can take it to nearest stable and register it.

Zelda: Breath of the Wild lets you enjoy an amazing perk in the game and that’s the ability to Slow Time while shooting Arrows. This helps you deal with multiple enemies at the same time and survive through their attacks. You can enjoy slowing time while shooting arrows at the enemies by simply gliding or jumping at your enemies from the above. This automatically slows down the time and helps you target more enemies. The Slow-motion is dependent on you level of Stamina, so be aware of that.

4. Talk to the Merchants, in Rain or in the Open

When you have to travel in Zelda; Breath of the Wild, you’ll see a lot of traveling merchants. You can buy various types of weapons and other valuables from these merchants. So, whenever you see them, do talk to them. In the Rains, the merchants offer loads of rare items that they don’t sell in the sunny weathers. So, don’t forget to talk to them when it rains especially.

5. Upgrade Your Armor by Re-Awaking The Great Fairy

When you are at Tal’oh Neag Shrine in the village of Kakariko, you’ll find a plant pod in the Forest. This plant pod is hiding the Great Fairy named as Cotera. In exchange for a Hundred bucks, you can re-awake the Fairy and her power. Request her to upgrade your armor and the Great Fairy will grant you your wish. It’s that simple.

6. The Horned Statue that Changes your Essence

While in the village of Hateno, look for a statue that looks a little bit mopey. This statue is known as “The Horned Statue” in the Hateno village and it can help you change your essence. By completing a side-quest you can ask the Statue to return your essence (Heart Container or a Stamina Vessel). You can make a deal with the statue and sell him one of your heart containers or stamina vessels for a hundred bucks. This might seem a little awkward deal but later on, you can re-buy your heart container or stamina vessel for only 120 bucks. So, don’t miss out the Horned Statue for a good bargain.

7. Grab the Fairies and Get Revives

You can also grab some of the small Fairies. This will turn the fairies into usable items that can revive you when your health is fully depleted. So don’t miss out a chance where you can grab the little fairies out of the air and have some really beneficial results.

You should know that you can stealth kill your enemies if they seem a little bit hard to cater with. In stealth mode, you can sneak up on your enemies from the back. While on your enemy’s back, you can activate a devastating blow and your enemy will perish instantly. Most of the times, this method kills the enemy in a single blow. But sometimes, when the enemy is more powerful, it can take more than one blows. So you must apply this mode of fighting whenever you have a chance.

9. Create a deadly Updraft by Lighting up the Grass on Fire

If you want to go gliding in the air, you can always set the fire on fire. This will create a powerful updraft and send you in the air instantly. This particular perk can help you create a distance between you and your enemies. You can also use the Slow-mo feature while coming down after the updraft sends you up.

10. Buy a House in Zelda; Breath of the Wild

When in the village of Hetano, you’ll find some workers trying to bring down a house near the Myahm Shrine. If you talk to their foreman named as Bolson, and he agrees with you, you can buy the house for 3000 bucks and a bundle of 30 woods. Once the purchase is complete, Bolson will refurnish the house for you by installing a number of cool upgrades. Each of the upgrades will cost you about 100 bucks.

The above Guide and Tips will definitely be helpful for you if you are a beginner and you have just started the game. Follow these guides and enjoy playing your favorite The Legend of Zelda; Breath of the Wild. Do tell us if you find these guides and tips helpful. We’ll love to hear from you.