MobiPicker
Mobiles Android LeEco Le Pro 3 Specs: Top Variant To Get 8GB RAM and...
Share on Facebook
Tweet on Twitter
Deal Alert: 49% Off on ExpressVPN
Touted as #1 VPN in the world, ExpressVPN is now offering 49% off & an additional 3-months of service on its annual plans.

We are already aware that LeEco is prepping the LeEco Le Pro 3 that comes with Snapdragon 821 SoC and 6GB RAM. Now a new leak suggests that the smartphone will have an another variant with 8GB RAM and a massive 256GB internal storage. The Chinese company is holding an event on September 21st where it might launch the smartphone officially.

The new leak suggests that the device will sport a huge 5.7-inches Quad HD (2560 X 1440) 2K display compared to the 5.5-inch seen on the 6GB RAM model. Coming to the chipset details, both the model will be powered by the Qualcomm Snapdragon 821 Soc Quad-Core processor with Adreno 530 GPU. It runs on Android 6.0 Marshmallow with company’s EUI on top. 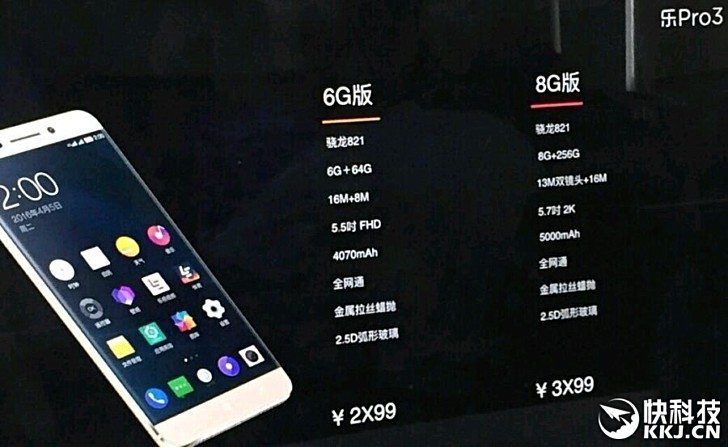 In the camera department, the 8GB RAM model will pack dual 13-megapixel rear cameras and a 16-megapixel front camera for selfies and video calls. While the 6GB variant will have a 16MP/8MP camera combination. Both the variants will have fingerprint sensors and Dolby audio support. Connectivity features include 4G VoLTE, WiFi 802.11 ac, Bluetooth 4.2, GPS, and USB Type-C port. In the battery department, the high-end model will pack a mammoth 5000mAh battery and the base model will have a 4,070mAh battery.

As for the pricing goes, there is no precise information but the base model should carry a price tag of RMB 2×99, while the higher-end model expected somewhere around RMB 3×99. Stay tuned for more details on the same.