The budget smartphone market has become very competitive nowadays, thanks to the numerous options available at affordable prices. The segment is mainly dominated by Chinese companies like Xiaomi, LeEco, etc. Top smartphones under 15000 INR are the most popular ones, and we have picked out some options to compare.

The LeEco Le 2 was launched recently and is a very deserving successor to the very successful LeEco Le 1s. Similarly, the Lenovo K4 Note was launched earlier this year and is a good upgrade over the Lenovo K3 Note. The third phone we are going to talk about is the Samsung Galaxy J5 (2016), which is strictly for those who want a Samsung phone.

So which one should you choose between the Lenovo K4 Note vs. LeEco Le 2 vs. Samsung Galaxy J5 2016.

Even though looks are subjective and different people love different designs on smartphones, there are some phones that are more good looking than what their price tag suggests. Take for example the LeEco Le 2, which looks amazingly premium with its thin, all-metal body and extremely thin bezels. The beautiful unibody is surely one of the best in this price range. Even the camera module and the fingerprint scanner look elegant.

The Lenovo K4 Note is also well-built, but does not get a full metal body. Instead, it has a plastic body surrounded by a metal frame. Nevertheless, the phone looks good and feels sturdy, so people who don’t want to attract much attention to their phones can get this. Lastly, the Galaxy J5 2016 also gets a metal body but is nothing special to talk about. It’s well built and gets a design similar to most of the other budget Galaxy phones.

The Lenovo K4 Note and the LeEco Le 2 come with a 5.5-inches Full HD screen, while the Galaxy J5 (2016) features a 5.2 inches Super AMOLED HD screen. So yes, the other two phones beat the J5 in terms of screen brightness and resolution.

In China, the LeEco Le 2 comes with a deca-core MediaTek Helio X20 processor, while in India it gets an octa-core Snapdragon 652 processor. The Lenovo K4 Note features an octa-core MediaTek MT6753 CPU, and the Galaxy J5 lags behind with a quad-core Snapdragon 410 chipset. Clearly, the Le 2 is the most powerful phone here in terms of performance and speed, while the J5 2016 is the least powerful.

Coming to the memory department, the K4 Note and the Le 2 come with 3GB of RAM, while the Samsung Galaxy J5 2016 features 2GB RAM. The LeEco Le 2 gets 32GB internal storage but no microSD slot for expansion. The Lenovo K4 Note gets 16GB internal storage that can be expanded up to 128GB. The J5 gets 16GB expandable up to 256GB.

The Galaxy J5 (2016) comes with a 13 MP f/1.9 rear camera with LED flash, and a 5MP f/1.9 front camera. It snaps very good photos that are slightly better than the Le 2 and the K4 Note in most cases. The LeEco Le 2 gets a good 16 MP f/2.0 rear camera with PDAF and dual tone dual LED flash that can shoot 4K videos, and there’s an 8MP selfie camera too. The Lenovo K4 Note gets a 13MP/5MP camera setup that shoots decent snaps.

Both the LeEco Le 2 and Lenovo K4 Note get fingerprint sensors and Android Marshmallow, which the Galaxy J5 (2016) does not.

The LeEco Le 2 costs INR 11,999, while the Lenovo K4 Note costs INR 10,999. The Samsung Galaxy J5 2016 has been priced at INR 12,990. Considering all the specs and features, the LeEco Le 2 is the best phone here with the absence of a microSD slot being the only disadvantage. The second best phone here is the Lenovo K4 Note, even though it gets an average camera. Buy the Galaxy J5 2016 only if you want a good camera and a Samsung phone, otherwise, it gets poor specs as compared to the other phones in the segment. 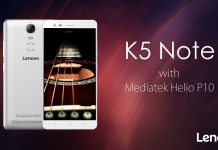