Earlier reports had suggested that the MediaTek Helio X25 would be exclusively made available for the Meizu, but recent reports suggest otherwise. A GFXBench listing has surfaced which shows the Chinese smartphone LeEco Le 2 (formerly LeTV) equipped with the same chipset.

LeEco (formerly LeTV) is a big name and China and it has done quite well in the smartphone market off-late. The device which has been spotted on the GFXBench is 5.5-inch phablet with an FHD display. The device will sport 3GB of RAM and 32GB storage of inbuilt storage. The device will run Android 6.0 Marshmallow.

The MediaTek Helio X25 chipset is an enhanced version of the MediaTek Helio X20. It is also a deca-core (10 cores) chipset with a tri-cluster design. It has two big Cortex-A72 cores, four medium A53 cores and four small A53 cores, each clocked at different speeds. The Cortex-A72 clocks at 2GHz. The chipset will include the Mali-T880 GPU, the same as in the Exynos 8890. 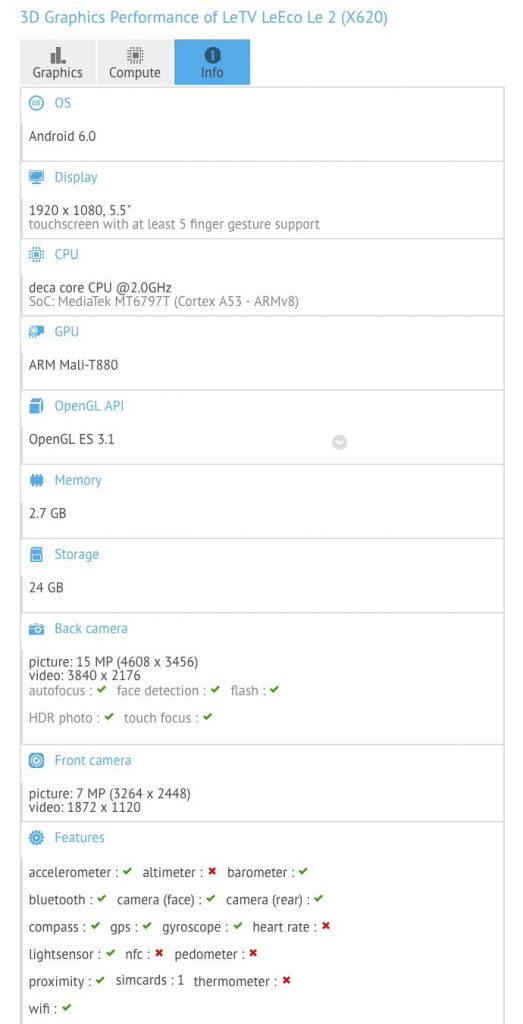 The LeEco Le 2 will sport a 16 MP rear snapper with 4K video capability and an 8MP/1080p secondary camera. The device supports dual-SIM functionality and both the SIMs will support 4G. The device also features USB Type-C port.

The LeEco Le 2 is scheduled for an April 20 launch and we’ll keep an eye out for the device.