MobiPicker
Mobiles Android LeEco Le 2 Pro Specs Leaked, Features 21MP Camera and Snapdragon 820
Share on Facebook
Tweet on Twitter
Deal Alert: 49% Off on ExpressVPN
Touted as #1 VPN in the world, ExpressVPN is now offering 49% off & an additional 3-months of service on its annual plans.

LeEco (formerly LeTV) recently came into huge limelight by becoming the first smartphone company to sell a Qualcomm Snapdragon 820 powered device. The company had also earlier launched its mid-segment device LeEco Le 1s which is doing quite good in the market.

But the company isn’t sitting idle after the two big releases as a new image has leaked which show the specifications of the upcoming LeEco flagship device LeEco Le 2 Pro. 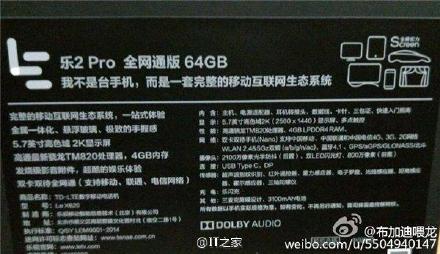 The image is that of the rear part of the package and it shows the detailed specs of the device. LeEco Le 2 Pro will be powered by the latest Qualcomm Snapdragon 820 chipset along with 4 GB of LPDDR4 RAM. It will feature a big 5.7-inch QHD display (2560 x 1440) and an inbuilt storage of 64 GB.

The Le 2 Pro will feature a 21MP rear shooter and an 8MP front-facing camera. It will pack a 3100mAh battery along with USB Type-C port. The rest of the features are not known and except for the battery, the rest of the specs are rock solid and puts this device in the league of giants like LG G5, Samsung Galaxy S7 and S7 Edge and Xiaomi Mi5.

The pricing and launched date are not available yet. We will keep an eye on the device and will update you with more details in coming days. Till then, stay tuned and do leave your comments below.