The forthcoming Nexus phablet created by LG and Huawei are definitely the two most leaked Smartphone in the past few months. In addition to the unending lists of specifications, cases and graphics leaks are the initial hands-on photos of the 2015 Huawei Nexus that provides the most excellent look at the phones. 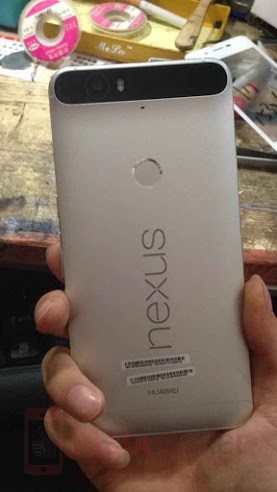 The phone pix made its debut appearance on Google plus, from Tiesen Fu, who declared he obtained it from a friend. How realistic are the images? While we cannot say much about the authenticity of the source of the photos, we are positive that the images are indeed realistic; it showcases a phone having both Nexus and Huawei logos. In addition, one can also spot two out of the three key inscription characteristic of the Nexus assemble.

The image also display a unique thickness that indicates the possibility of the upper section possessing a thicker camera module attached to an extremely thin phone.

In addition, the photos also display a fingerprint scanner, and dual front speaker. At the back, there is a dual LED flash and rear camera fitted inside what looks like a pill-shaped glass panel.

It should be noted that Steve Hemmerstoffer famously known as the “Onleaks” had previously disclosed the images of what resembles this Nexus Smartphone in a pre-release. The front part of the phone resembles a big portion of glass subjugated by the most talked about 5.7 inch display, 3500mAh battery, and Snapdragon 810 system chip.