As Reliance Jio’s Happy New Offer moves towards its expiration date, rumors of another mind-boggling offer have started cropping up. This time, the telecom giant is reportedly bringing the Preview offer with its JioFiber broadband service.

Much like what we witnessed with Jio 4G preview offer, the JioFiber offer, as reported by some users, will be providing free internet to the subscribers for the first three months. Not to mention, this is Jio’s latest bid to provide high-speed internet access, but for now, that’s only limited to some specific areas! 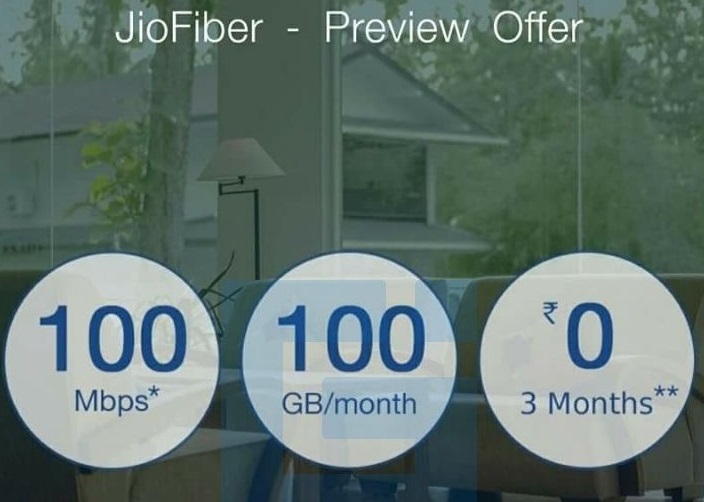 According to Gizmotimes, the company will be offering a broadband plan with 100Mbps up to 100GB and 1Mbps thereafter. The FUP limit will be renewed every month, taking your connection speed back to 100Mbps. The drill is pretty much the same here, except for the speed. This time, we’re talking about big numbers and not just free internet access as it has been with Jio 4G for months now.

As for availability constraints, it is important to note that JioFiber is limited only to Mumbai. We expect a gradual expansion to Delhi and Chennai, but for now, this is as users in Mumbai are the lucky ones to bag the offer.

Also, users signing up for the Preview Offer will have to pay a nominal amount of Rs. 4,500 as a security deposit. Jio, just like other broadband providers, will seek security while installing the connection, and will refund this amount after the 3-month period is completed. Though, the report is still unconfirmed as the official terms and conditions of the plan are still under the wraps.

Among other things, rumors also suggest that Jio plans to unleash its own DTH service, taking on Airtel, Videocon, and Tata Sky. Under this, the company is said to bring a trial offer, providing more than 360 channels (50 in HD) at absolutely no cost for a period of 6 months. There’s still no word on the two offers, but we expect to hear more from the company in days to come.

Summing things up, we can say, the Mukesh Ambani-owned giant is doing everything it can to give Airtel, which recently launched its V-Fiber service, a run for its money. The telecom giant has already shaken up the 4G market, and now with its newest offerings, it aims to be the new leader in all sectors of the industry.