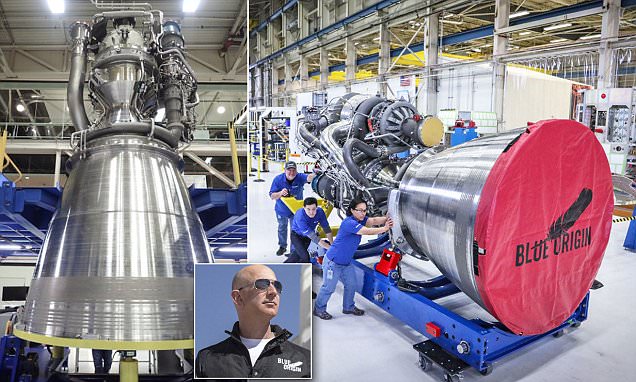 The BE-4 engine will be one of 7 powering Blue Origin’s  New Glenn 2 and 3-stage rocket. It will be a reusable space vehicle with the first stage capable of returning to the launch site and landing upright after the flight.

The assembly marks a key step for the fledgling space firm against Elon Musk’s Dragon heavy rocket. Unveiled in October last year, New Glenn is capable of launching payloads and people into orbit. It’s much bigger than Dragon, with its stage 2 standing tall at 270 feet, while stage 3 at 313 feet.

First Settlement On The Moon With New Glenn

New Glenn’s capability to transport humans and cargo is also in line with Bezos’ aim to provide a lunar equivalent of Amazon Prime – delivering equipment to the moon to help set up the first human settlement.

If all goes as planned, his Earth-to-Moon cargo delivery service could lift off in 2020, carrying as much as 10,000 pounds of goods to the Moon’s South Pole. Bezos has even reserved a parking spot near the Shackleton Crater on the South Pole, which has constant sunlight and hydrogen supply for the rocket fuel.

The Bezos-Musk face-off gets even more intense with Blue Origin confirming its plan to send paying customers into orbit in 2018. President of the space firm Rob Meyerson said, ”We’re still on track for flying people — our test astronauts — by the end of 2017, and then starting commercial flights in 2018”.

A few days back, Elon Musk had announced that SpaceX will fly two citizens around the moon next year.