MobiPicker
Mobiles iOS iSkin: Download and Install Themes on iPhone, iPad, iPod Touch Without Jailbreaking
Share on Facebook
Tweet on Twitter
Deal Alert: 49% Off on ExpressVPN
Touted as #1 VPN in the world, ExpressVPN is now offering 49% off & an additional 3-months of service on its annual plans.

Why do people jailbreak? Well, mainly to increase the customization abilities of their iOS devices. However, there are times when there is no jailbreak available for the latest iOS version. Also, many people do not like the security risks that are associated with jailbreaking. In such cases, people often wonder whether it is possible to install themes on iPhone/iPad/iPod Touch devices without jailbreaking.

Thankfully, there’s a new platform called iSkin that can be used to download and install themes on iOS devices without jailbreaking. Of course, you should know that all iSkin does is add themed app icons to the Home screen. It does not replace the existing icons, so you’ll have to place all the stock icons in a folder to hide them away. So this is not a perfect or an ideal theming platform, but that’s all you can get on stock iOS while iOS 9.3.2 jailbreak is still away from its release. 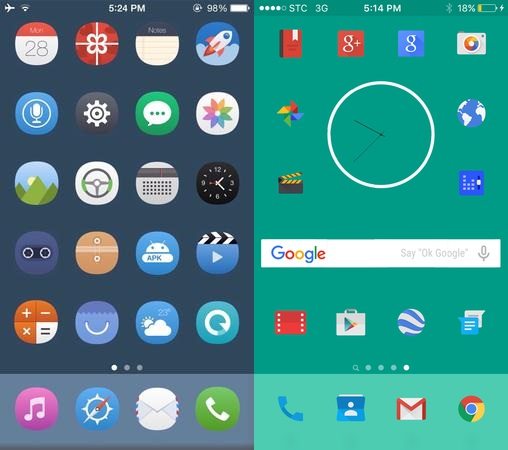 So how to use iSkin? It is very simple, and to make it even simpler, we have put together an easy tutorial for you. Just follow the steps given below and you will be theming your stock iOS device in no time.

How to Use iSkin to Install Themes on iOS Devices

If you want to delete the themed icons, you can tap and hold on the icons until they start to wiggle and then you can remove them.