Asus has tasted great success with its ZenFone series of budget smartphones, and the success was carried on to the ZenFone 2 series. The company has already teased the new Asus ZenFone 3 smartphones in a new video released yesterday, and the new phones are going to be released on 30th May. Though the company did not leak any specs or features, a new AnTuTu benchmark listing shows some promising specs. 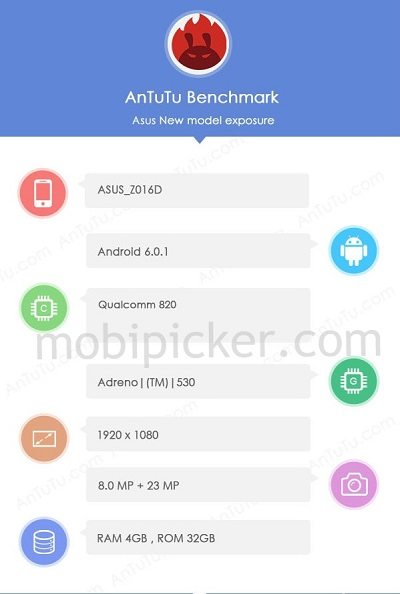 The new AnTuTu listing is for a smartphone named ASUS_Z016D. The phone features Full HD screen and is running the latest Android 6.0.1 Marshmallow firmware. Powering the device is Qualcomm’s Snapdragon 820 along with Adreno 530 GPU. The possible Asus ZenFone 3 has got a 23MP rear camera and an 8MP front camera. It has 4GB of RAM and 32GB of internal storage.

The high-end specs including high-resolution cameras, 4GB RAM, latest flagship chipset, and Marshmallow firmware all point towards the suggestion that this device is indeed a flagship. That, along with the fact that Asus has started teasing the ZenFone 3, is enough to tell us that this might indeed be the ZenFone 3. It might even be the ZenFone 3 Deluxe, while we expect the ZenFone 3 Max to come with a better display.

Some rumors from China suggest that the ASUS_Z016D, possibly the Asus ZenFone 3, might be priced around $305, which seems perfect for a high-end budget flagship. We also expect the phone to come with NFC and a fingerprint sensor. The official launch is on 30th May, so stay tuned for more info.