MobiPicker
Mobiles iOS iPhone Display Units To Come With Kill Switch; To Prevent Thefts
Share on Facebook
Tweet on Twitter
Deal Alert: 49% Off on ExpressVPN
Touted as #1 VPN in the world, ExpressVPN is now offering 49% off & an additional 3-months of service on its annual plans.

If you have been following the latest tech news, you are probably aware that Apple plans on removing the security tethers from iPhone Display units in retail stores. Whenever you step in to an Apple store, you will immediately notice that the display units and other Apple products – including iPads and iPods – are tied to a security tether. And now Apple wants to do away with these security tethers. Well, does that mean Apple is attracting thefts and inviting trouble? No way!

You are probably wondering that Apple is taking a huge risk by removing the security tethers which immediately alert retail stores should a theft occur. But as always Apple does wonderful things. And the display units now come with a kill switch to prevent unwarranted thefts. The kill switch is basically a software which disables the iPhones the moment the devices go out of range of the store’s WiFi. The software prevents Apple the hassle of having to use My iPhone to disable stolen iPhones manually. 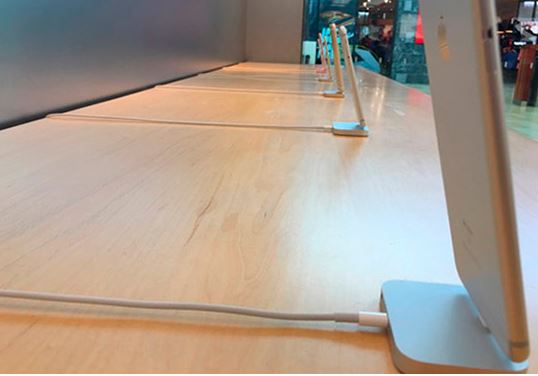 Only the products on display in the retail stores will come with this special ‘kill switch’ software. The iPhone you buy from the store will not have one. The main purpose of the kill switch is to disable iPhones or other products that are on display the moment they go out of the retail store’s WiFi range. Even if an iPhone is stolen, the device will become practically useless once it goes out of the store’s WiFi range. Sounds like an interesting way to disable stolen iPhones? Sure does!

Apple’s decision to do away with security tethers is indeed a bold move. But given the security that the kill switch will provide for all products displayed in the retail store, Apple doesn’t have to worry about stolen iPhones and iPads and can safely concentrate on giving users the best feel and experience. That’s Apple for you, folks!