Apple iPhone 6s seems to be overpriced, according to an investigation about the total cost of building it. Merrill Lynch, a well-known investment banking enterprise (now acquired by Bank of America), gathered its analysts to find out the building cost of the Apple iPhone 6s. They carefully considered all the new features, including the new camera sensor, the pressure-sensitive screen layer and the haptic motor for the 3D touch tech. 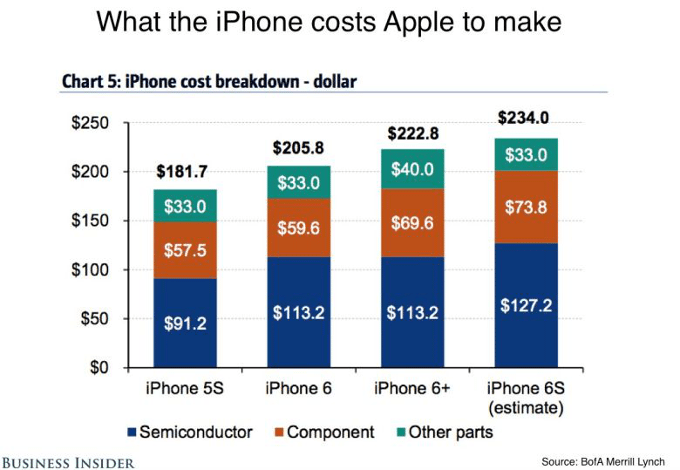 The most expensive part of all is the screen of the phone, which costs about $74 – far more than the aluminum chassis and cabling that costs about $33. Half of the cost goes to the cellular and silicon components, like $25 for the 14nm A9 Processor, $20 for the 64 GB memory piece, $36 for Qualcomm’s LTE modems, and $22 for sensors such as the fingerprint scanner.

The experts concluded that the total cost of building a 64 GB iPhone 6s is roughly about $234. If you include some spending on R&D and distribution, it would cost about $250 in total, while the price Apple requires for this phone is $750!

Considering that Apple maintains its prices for a longer time than other smartphone manufacturers, it is not so hard to understand why Apple is the most profitable company. For some people, it is worth paying that amount of money. For others, it is far too overpriced.

Regardless of the profit margin, the great demand for the phone certainly shows that Apple done an amazing job in marketing the new iPhone 6s!