MobiPicker
Mobiles iOS iOS 9 Upgrading Has Errors; Here Are the Solutions
Share on Facebook
Tweet on Twitter
Deal Alert: 49% Off on ExpressVPN
Touted as #1 VPN in the world, ExpressVPN is now offering 49% off & an additional 3-months of service on its annual plans.

According to the latest statistics from Mixpanel, iOS 9 has an adoption rate of over 18%. However, upgrading to Apple iOS 9 seems to be problematic for those who have older devices, majorly due to two bugs.

When trying to update to iOS 9, a large percentage of users got an error message displayed on their phones, saying “Software Update Failed”. The error shows just after agreeing with the terms and conditions and doesn’t say anything more than “An error occurred downloading iOS 9”.

Apple hasn’t given any explanations or solutions regarding this issue. However, we can guess that the problem has occurred because there is a lot going on and the servers haven’t been able to deal with the tremendous amount of requests. 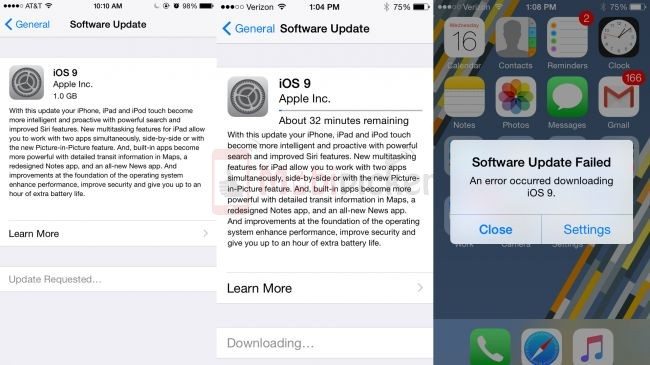 How to Fix the “Software Update Failed” Problem?

Here are two possible solutions that may work for you.

1. Try again; perhaps the problem is that the Apple servers can’t handle the requests fast enough.

2. Go old school and download the software manually from your computer. This requires a USB cable, a computer and iTunes. You might be surprised but we believe this is the best solution at the moment.

The second error, which is much worse than the first one, freezes your iPhone and shows you a “Slide to Update” message. You try to slide, but nothing happens; your phone is completely frozen. However, here are some solutions that might work for you:

1. Lock the phone with the power button. Do this a few times and your phone may begin to respond.

2. Download and restore your device to iOS 8.4.1 through iTunes (you may have to put your device in DFU mode). Then try to update to iOS 9 again.

At the moment, these are the best solutions we can provide you with. Until we hear from Apple or get an update to fix the bugs, try these out! Stay tuned for updates on the issue.