Talking about the current situation in the iOS community, iOS 9.3.1 is the latest stable release while iOS 9.3.2 is in the beta phase. But when the discussion moves on to jailbreaking, we have nothing to say these days. That’s because, after the iOS 9.1 jailbreak, we haven’t seen any jailbreak release till date. However, you will be surprised to know that there are a few iOS 9.3 jailbreak tools already available.

Before you get all happy, I should let you know that this article is a sequel to our previous article titled “iOS 9.3.1 Jailbreak Released, But You Wouldn’t Want It!“. In that article, I told you about two fake jailbreak sites that were offering iOS 9.3 and iOS 9.3.1 jailbreaks and were calling themselves TaiG and Pangu. Of course, those jailbreaks were fake and could harm your security. 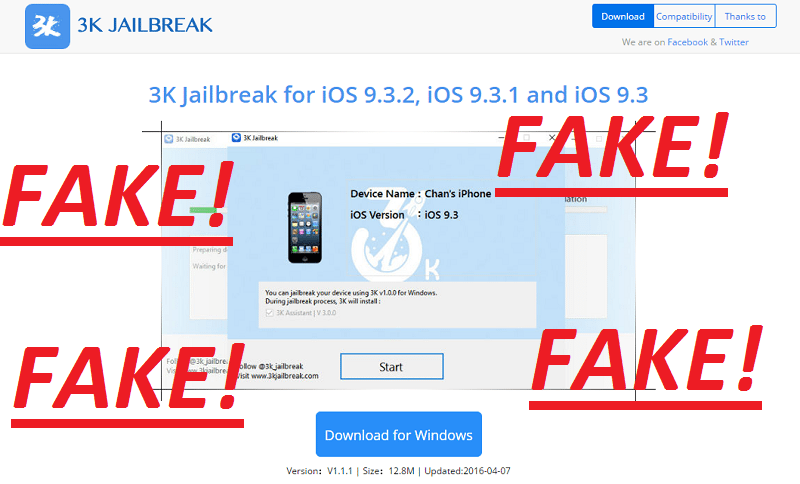 The 3K Jailbreak website (3kjailbreak.com) sites on the front page in a lot of Google search results, which makes it easier to catch the eyes of the users. This website claims to offer you a jailbreak for iOS 9.3, 9.3.1, and 9.3.2. However, when you click on the Download button, it says that “Download has been temporarily stopped to fix the 60% issue”.

Another website is called Semi Jailbreak (semijb.com) and it claims to offer you a browser-based iOS 9.3 jailbreak. But when we visited it through a Windows PC, it said that we needed to visit the site using Safari browser of an iOS device.

I think these are all fake jailbreak sites, because if they are offering a jailbreak for iOS 9.3, iOS 9.3.1 or iOS 9.3.2, it is highly suspicious. That’s because no jailbreak for the aforementioned iOS versions has been found yet, and even if these were real, it would be in the news all over the internet.

So if you come across any jailbreak right now, make sure to cross check it from popular news sources and from several jailbreak forums to see whether it is real or fake. Also, always trust only popular jailbreaks.

While there are a lot of websites that offer fake jailbreak tools full of malware or adware, there are many other sites that are just simple blogs. They publish several blogs related to jailbreaks everyday and get ranked on the first page of Google’s search results.

But when you go to those sites, you will find that they just talk about the same thing again and again and never offer any download links until TaiG or Pangu or any other popular sites release a jailbreak tool. The reason is simple- they get ranked on Google, you come to their site thinking you will get a jailbreak tool, and they get a lot of page views resulting in more income from Google Adsense.

So they earn money and all you get is text that you have read a hundred times before. That just wastes your time even more. Of course, those blogs do sometimes publish jailbreak news like we do, but most of the time they just use keywords like “download ios 9.3 jailbreak” or “ios 9.3.1 jailbreak download” to bring more traffic and get more money from ads. But then again, unless they are causing any harm, they are just wasting your time and nothing else.

Have you come across any fake jailbreaks? Tell us in the comments below. Stay tuned for more updates.