MobiPicker
Mobiles iOS iOS 9.3.2 Jailbreak Alternative Mojo is like Cydia for Non-Jailbroken iPhone/iPad/iPod Touch...
Share on Facebook
Tweet on Twitter
Deal Alert: 49% Off on ExpressVPN
Touted as #1 VPN in the world, ExpressVPN is now offering 49% off & an additional 3-months of service on its annual plans.

In case you are an iOS user who likes to use jailbroken iPhone/iPad/iPod Touch devices instead of the stock ones, then this is a really frustrating time for you. There has been no jailbreak release since a long time, and there’s no guarantee if we are going to get the iOS 9.3.2 jailbreak before WWDC 2016. Well, that’s where the new Mojo installer will come handy.

We have already told you about how you can use Extensify to install tweaks on iOS without jailbreaking. Well, Mojo is not about tweaks, but until there’s any jailbreak available for the current firmware, it lets you install screen recorders, game emulators, and other such cool stuff on your iPhone, iPad, or iPod Touch without jailbreaking. Mojo is an app-based installer and allows you to add repos like Cydia. 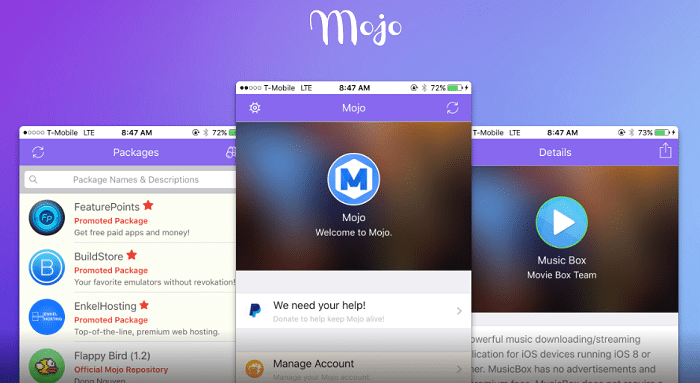 Of course, Mojo is not a perfect Cydia alternative and isn’t much of an iOS 9.3.2 jailbreak alternative. However, it will keep you happy unless a new jailbreak tool is released. If you want to know how to install Mojo on iPhone, iPad, iPod Touch devices, we should tell you that the process requires some confusing steps that you need to do. But we have already prepared an easy tutorial for you. So just follow the steps given below to download and install Mojo on your iOS devices.

You can now open Mojo and add repos to download and install any apps of your choice. Certain apps might add their own certificates, so to launch those apps, you will have to go to Settings > General > Profile and Trust those apps.

How to Delete/Remove/Uninstall Mojo from iPhone/iPad/iPod Touch

In case you did not like Mojo or don’t want it on your iOS device any more, you can simply remove it by following the easy steps below.

Have you tried out Mojo yet? Share your experience in the comments below.