After deploying various beta versions of its latest mobile OS, Apple has finally rolled out the final release of iOS 9.2 to its consumers worldwide. Various Apple devices which have been listed for the iOS 9.2 compatibility will receive the update package with size around 300MB which will vary with the device type and region. The latest versions of iPhone, iPad, iPod Touch along with some predecessors will receive the update.

The iOS 9.2 comes with a series of bug fixes, improved stability and enhancements and is a must to install right away. Considerable number of features have been added to different applications. The most significant ones are listed out in this post. 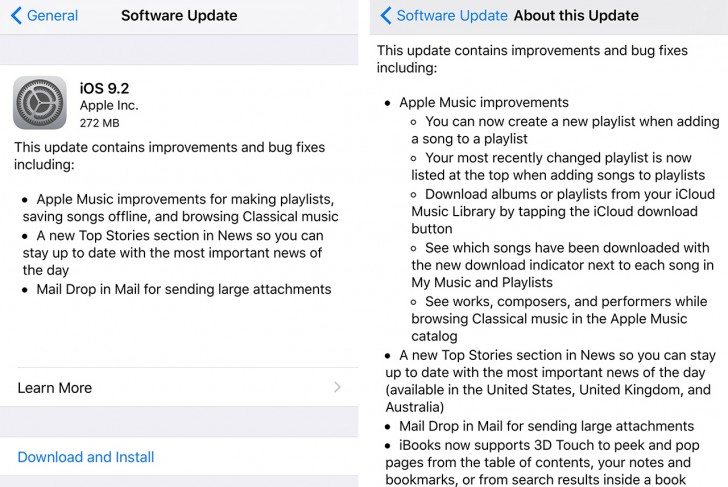 Apple music has an added support to create new playlists and shows the most recently modified playlists at the top while adding new songs to existing playlists. Music browsing has been enhanced within the app which now shows to the user composers, performers and other works when browsing for classical music. Feature to download albums as well as playlists from iCloud music library with new indicators to indicate the downloaded tracks will prove much useful.

A Top Stories section has been added to the News app on the iOS 9.2. This section will present breaking news and important events throughout the day. The feature is currently available only in the US, UK and Australia.

Mail app now has the much wanted Mail Drop which will enable the users to send large attachments right through their Apple device. Siri has added language package for the Arabic in Saudi Arabia and the United Arab Emirates. Users can now peep and pop through pages of eBooks in the iBook apps via the 3D touch feature introduced in the iPhone 6 and its variants. Audio books can be listened too while reading other books, browsing libraries, iBooks store or doing other tasks side by side on your device.