Apple has released the iOS 10.3.2 update after extensively public testing it for about six weeks. The new version of iOS is compatible with iPhone 5 and higher, iPad 4 and above and 6th gen iPod Touch. The update weighs around 150 to 200 MB.

What about iOS 10.3.2 Jailbreak? Should You Install the New iOS Update?

Apple has just released an incremental update of iOS update. The new update not only improves the performance of the iOS device but also comes with bug fixes. According to Forbes, installing the new iOS 10.3.2 update on any iDevice that has been jailbroken will not allow users to jailbreak it again. The publication claims that a jailbreak for iOS 10.3.1 is drawing near, but it does not mention which jailbreaking group will be releasing a jailbreaking tool for it. 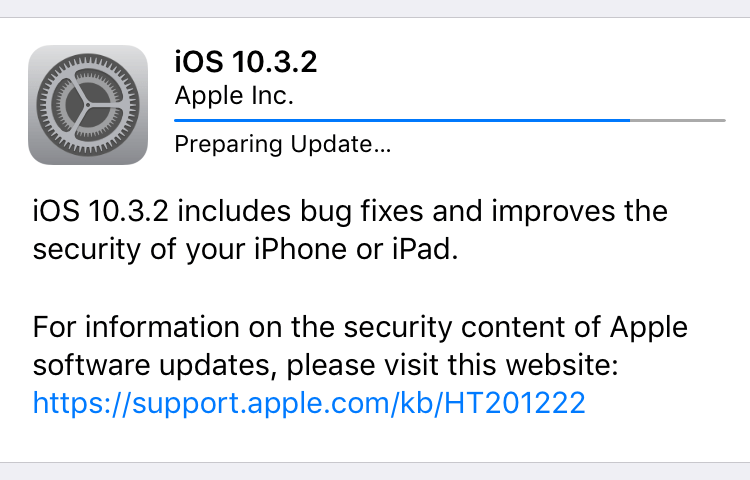 In April when Apple had released the beta edition of iOS 10.3.2 update, it stopped signing iOS 10.2.1 and 10.3. It meant that users could not downgrade from iOS 10.3 or 10.3.1 to previous versions. Users with devices running on iOS 10.3.1 will be glad to know that a jailbreak is around the corner.

So, users who have upgraded to iOS 10.3.2 can downgrade to iOS 10.3.1 as Apple has not stopped signing the latter. Once signing to iOS 10.3.1 is stopped, users will not be able to downgrade from iOS 10.3.2 to the previous version. As far as iOS 10.3.2 jailbreak is concerned, since the update has just released, there isn’t any concrete news on a jailbreak for it.

The semi-untethered Yalu iOS 10 jailbreaking tool that was created by Luca Todesco supports versions like iOS 10.1, iOS 10.1.1. and iOS 10.2 on rooted 64-bit iPhones that were released before iPhone 7. On rooted iPhone 7, it supports only iOS 10.1 and 10.1.1. Todesco has said that Yalu will not be updated for iOS 10.3.3 since he is retiring from jailbreaking.